The City is weighing a plan from the Army Corps of Engineers for what the Corps has determined to be the most feasible method for protecting life and property on the peninsula from future storm surge. The central feature of the feasibility study is a barrier system up to 12 feet high that would run for 8.7 miles around the Charleston peninsula. The anticipated $1.1 billion price tag for construction a baseline number, and does not include any enhancements for aesthetic improvement. It would be funded 65% by the federal government and 35% by the City. 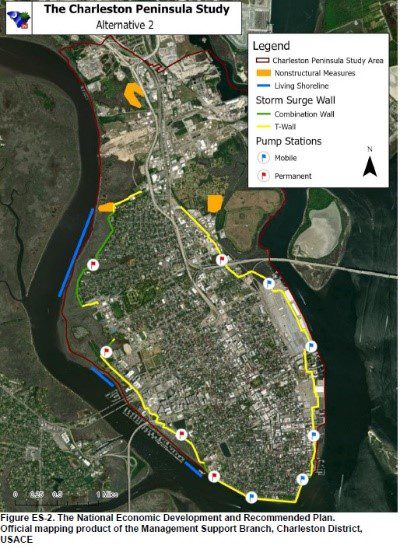 A January 21, 2022 rendering of the seawall alignment. As proposed, a majority of the wall would be on land, and is designed as a “T-wall” with vertical concrete stem walls and pile-supported bases.

This month, the City and Corps’ negotiations hit a major milestone. At Council’s direction, the Mayor sent notice to the Corps that the City supports completing the current feasibility phase. This correspondence is a prerequisite for Congress to appropriate $34 million in federal funding that would be needed for the next phase of the project: Preconstruction, Engineering and Design (“PED”).

If PED is ultimately authorized and the City chooses to move ahead, it would then pay a 35% cost share for the studies ($17 million) over 3-4 years. Construction would not begin until after PED is complete, which is unlikely to be before 2026.

We also gained a preview this month of the negotiation that will be a part of the PED process. In a letter dated February 7, the Mayor outlined a number of highly problematic alignments in the Corps’ most recent plan that must be changed, including:

We share the concerns expressed by many in the community, including many of our members, about the seawall’s impacts – visual, physical, environmental – on our City and its unique architectural character. In all of the comments we have provided to the Corps, we have probed the effectiveness and functionality of the proposed system.

Further, the overall philosophical approach to water management the Corps has elected deserves careful scrutiny. As sea levels rise, we must seriously consider how to combat compound flooding issues with innovative solutions. We are mindful that nature is rarely deterred by concrete. In the worst-case scenario, the wall could add to our problems if its complex set of gates and pumps are ineffective at draining stormwater, causing a more severe bathtub effect than already occurs.

Furthermore, the Corps’ proposal potentially threatens to divert valuable resources. Opportunities for building the City’s resiliency may be lost if we focus our fundraising on solving only a subset of our flooding challenges. We strongly supported efforts by City Council in this year’s City budget to fund a Comprehensive Water Plan to define water management priorities and gain more community consensus. The $500,000 set aside is a start, but it is insufficient to produce the type of plan we need, especially to inform our negotiations during PED. Moving forward, we will be urging the City to make this plan its top priority.

We end on an encouraging note. Last week a bipartisan group of U.S. Senators and Representatives introduced the SHORRE Act to fortify and protect the nation’s coasts and rivers from the effects of climate change. If passed in its current form, the bill would provide Charleston the opportunity to work with the Army Corps to address comprehensive flood risks in addition to those presented by storm surge. The PSC welcomes this prospective clarification of the Corps’ authority from Congress as an important step toward implementing the right solutions to protect the City we have fought for over a century to protect.