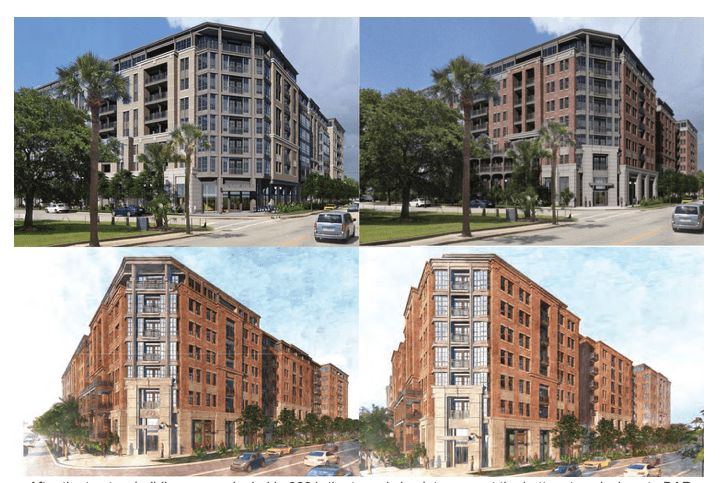 After the top two buildings were denied in 2021, the team is back to present the bottom two designs to BAR this week

The developers of 295 Calhoun Street will be back before the Board of Architectural Review – Large (BAR-L) this week, with not one but two separate proposals for the large mixed-use building that are almost identical to the versions rejected by the Board last year.

That’s right; with two outright denials in their pockets and having dragged the City once through a lengthy and expensive litigation process, they’re back for more.

So, for a third time, the Preservation Society of Charleston will be there to oppose these massive and out of character building proposals.

In an unprecedented maneuver that packs the agenda and monopolizes city resources, this development team is mounting a desperate attempt to bully its way to an approval.

If Board members deny agenda Item #1 on Wednesday, which includes a request for an additional eighth floor for architectural merit, the same team will stay at the podium and present a slightly shorter version of the building that is clearly inferior in quality.

These developers know being denied by the BAR requires them to go back to the drawing board. To return after denials and unsuccessful legal mediation with essentially the same design is highly irresponsible.

Residents, advocates, and the BAR have all clearly stated their positions that this design is wrong for Charleston and needs to be redone. Yet, here we are again.

This saga has dragged on for 18 months — the BAR needs to send another clear message that our city deserves better and won’t be taken advantage of by investors with no interest in building something meaningful for Charleston.

Stand with the preservation groups that have consistently spoken in unison against the inappropriate proposal for 295 Calhoun Street. The BAR-L meeting will take place on Wednesday, October 12 at 4:30 p.m., in the Gaillard Center Public Meeting Room at 2 George Street.