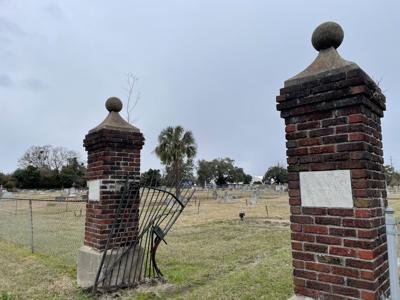 The Unity Friendship Society is only one of 23 cemeteries in the upper peninsula historic district. New nonprofit hopes to raise awareness and support for them. Robert Behre/Staff

Historic preservation began with a focus on the oldest, most architecturally significant buildings, especially those associated with historically prominent figures and events, but the movement expanded to embrace more modest, vernacular buildings — those that tell the stories of everyday people.

Turns out, that’s the way cemetery preservation works, too, at least in Charleston.

Consider the upper peninsula area where thousands of city residents were buried between the late 19th and early 20th centuries. The earliest, largest and most prominent cemetery here is Magnolia, covering about 92 acres along the marsh and Cooper River. It was founded in 1850, as the city’s downtown burial grounds were filling up and as the Western world was embracing a new rural cemetery movement, creating vast cemeteries just outside urban areas.

Magnolia was listed on the National Register of Historic Places in 1987, but it was only the first and largest chapter in a much longer and more interesting story. Other religions, denominations and African American mutual-aid burial societies eventually followed suit between 1850 and 1956. Each found its own tract north and south of Cunnington Avenue, mostly west of Huguenin Avenue.

And three decades after Magnolia was recognized, it and 22 neighboring burial grounds have been listed as a district on the National Register of Historic Places. But this recognition is only a first step, as a new nonprofit aims to spread awareness of this special area to help beautify and maintain it for generations to come.

Victorian society embraced the natural design of new garden cemeteries, with ponds, trees and rambling pathways. These new places provided space not only for more monumental memorials to the deceased but also for restorative space for the living, places to take long walks, picnic or even take a date.

Today, Charleston’s district still is an excellent place for a long walk, although some of its burial grounds are better tended than others.

Indeed, its National Register nomination notes that the area “maintains a high level of integrity, despite the development pressures surrounding its border. The cemeteries located in the district have not be moved, obliterated or adapted for new uses. Each cemetery within the district still maintains its individual characteristics through landscaping, tomb or monument design and spatial relationships, historic structures, and fencing.”

How long it will remain that way is the real issue here, and that’s why the Charleston Cemetery Historic District Task Force formed in 2013, successfully pursued the historic recognition and now is pivoting to draw fresh awareness and support.

“People don’t know much about this district,” says Anna-Catherine Carroll of the Preservation Society of Charleston, which supports the task force. “Many don’t even know it’s here.”

The task force, now a nonprofit in its own right, includes representatives of many, but not all of the cemeteries as well as supporting members with the Preservation Society, Board + Batten Preservation and the Nelson Mullins law firm. They’re now seeking grants for new signage that would give the area a more dignified gateway (currently, only a green highway sign off Meeting Street notes the location of Magnolia Cemetery) and would educate the public about the names, specific locations and general history on the individual cemeteries. The effort comes as urban Charleston is moving in next door, just to the south.

When these cemeteries were created, the city was about 2 miles away; that’s changed and only will continue to change more. In fact, the Laurel Island development plan was praised for reducing the height of its buildings on its northern end because they will be next door, and easily visible, to the cemeteries.

If properly respected and maintained, these cemeteries can provide a vast, passive park — far larger than any other on the peninsula — that would not only honor the dead but also bring joy to the living. The cemeteries are cared for by many separate groups, some of which are doing fine while others are dwindling in number and means.

For a city proud of its diversity, the district represents that diversity as well as any place, its monuments and markers reflecting a broad sweep of history, cultural and ethnic heritage.

Task Force chair Charles Karesh tells a story from retired Charleston Judge Richard Fields, who remains a member of the task force even after he turned 101.

“Judge Fields says, ‘If no one cares and upkeeps a cemetery, it becomes a graveyard,’” Mr. Karesh said. It also becomes a more threatened and threatening kind of place, one that speaks sadly, if softly, of all of us — both those who have gone and those of us who are still here.