In Charleston, S.C., Saving Historic Homes Means Hoisting Them in the Air 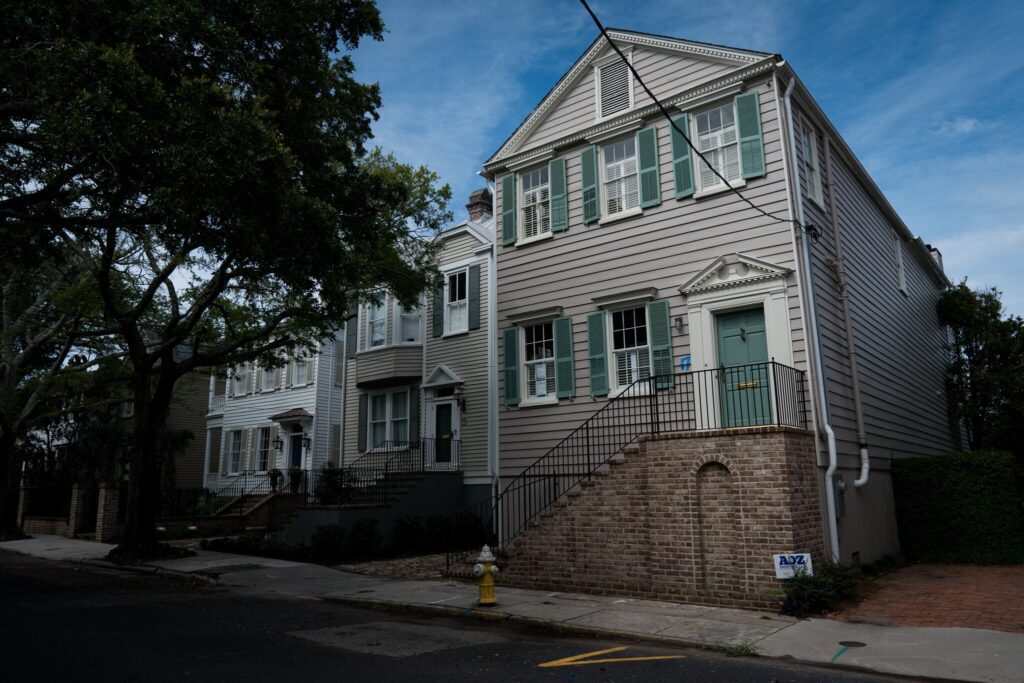 After years of flooding, Allen and Lee Kaplan decided to hoist their historic two-story Charleston, S.C., home roughly six feet into the air. Credit…Cameron Pollack for The New York Times

CHARLESTON, S.C. — Over the course of 150 years, the generations who lived in the handsome house at 17 Logan St. shared a similar experience when walking out of the front door: There were four or five steps to descend, and then it was out onto the flat streets of one of the most beautiful, well-preserved — and flood-prone — cities in the United States.

So it is still a shock for the current owners, Allen and Lee Kaplan, when they pass between the doorway’s elegant fluted pilasters and find themselves at the top of their new outdoor staircase, one story up in the air.

“This still freaks us out, standing here,” Ms. Kaplan said on a recent afternoon, looking down on her neighbors’ front doors across the street.

After four floods in the past five years that saw water fill their crawl space and threaten to swamp their ground floor, the Kaplans decided to spend more than a half-million dollars to hoist the two-story home by roughly six feet. It was a radical move that a few years ago would have drawn howls from Charleston’s powerful preservation community, and almost certain rejection from the city’s Board of Architectural Review, charged with policing changes to the city’s 3,500 historic buildings.

But today low-lying Charleston is seeing its eternal struggle with flooding exacerbated by climate change, with intensifying storms, a rising sea and downtown streets that transform into impassable creeks with distressing regularity. As a result, this coastal city, whose ardent defense of its historic neighborhoods set off a 21st-century tourist boom and contributed to a regional economic renaissance, is being forced to accept that the very concept of preservation must now, paradoxically, embrace change — and that some of its most historic buildings need to be hoisted up.

“There’s been a huge philosophical shift,” said Winslow Hastie, director of preservation with the Historic Charleston Foundation. Mr. Hastie’s group was originally opposed to the idea of elevating old homes. But it has changed its tune in recent years, and now echoes city officials, who regularly speak of flooding as an “existential threat.”

Charleston’s embrace of home elevations reflects a growing dilemma for elected officials, emergency managers and city planners around the country as climate change gets worse: Is it possible to save coastal cities and towns from rising seas? How much will it cost? And how much of the world as we know it will we be able to keep?

Those questions are being propelled by the rising costs of recovering from hurricanes and other disasters, which the Government Accountability Office has warned may be unsustainable. Disasters linked to extreme weather have caused more than $450 billion in damage nationwide since 2005; the number of disasters causing more than $1 billion in damage reached 22 last year, a record.

Workers installing protective panels at the Mills House Wyndham Grand Hotel in Charleston ahead of Hurricane Florence in 2018.Credit…Johnny Milano for The New York Times 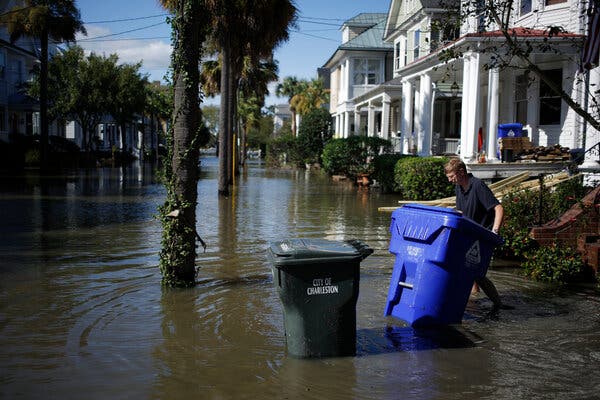 Arthur Smith moving his recycling bin amid floodwaters Hurricane Irma brought to Charleston in 2017.Credit…Luke Sharrett for The New York Times
In response, the federal government has pushed local officials to do more to protect their residents before a disaster happens, for example by elevating buildings and building sea walls or other flood-control infrastructure. In May, the Biden administration announced that it would double the amount of money awarded by the Federal Emergency Management Agency for funding local resilience projects.

Charleston is one of a number of coastal cities where the U.S. Army Corps of Engineers is proposing to build a massive sea wall to protect against storm surge. But the $1.4 billion proposal is generating new ripples of concern about its potential effect on views of the water and the character of its most iconic neighborhoods.

Such aesthetic concerns reflect the broader threat that rising seas pose to the nation’s cultural heritage. One 2017 study found that in the Southeastern and Gulf States alone, more than 14,000 significant cultural resources, including historic buildings and archaeological sites, will be threatened with destruction if, as forecast, sea levels rise roughly one meter — about 3.3 feet — over the next century.

The Charleston sea wall could be years away. In the meantime, the city planning department said that as of the end of December, 18 historic homes had been elevated, 14 were in the process of being lifted, and 14 more had been approved for elevation but required further permitting. Mayor John Tecklenburg believes that hundreds more will likely need to be raised in anticipation of a predicted sea-level rise of two to six feet in the next 50 years.

So far, preservationists are pleased with most of the elevations, which must follow special design guidelines adopted in 2019. The use of “traditional masonry materials” is encouraged. Allowing parking areas underneath jacked-up homes is frowned upon, as is “beachy” lattice work between new piers.

The elevation process is expensive and complicated. Metal beams are placed beneath homes like the Kaplans’ before computer-assisted hydraulic jacks lift the structure.Credit…Allen Kaplan

The change in posture is particularly profound for Charleston. The 351-year-old city created the nation’s first historic district in 1931 to protect a collection of churches, municipal buildings and homes that evince a range of styles — Georgian, neo-Classical, Italianate, Victorian, Gothic revival — and collectively achieve a kind of symphonic grandeur. The near-obsessive focus on preservation has paid off: In 2019, the city welcomed more than 7.4 million tourists, a number that dropped in 2020 because of the Covid-19 pandemic, but is expected to tick up again. The Charleston metropolitan area has grown to more than 800,000 residents in recent years, smashing growth projections.

“The value proposition for preservation was, ‘Fix it up and they’ll come,’” said Kristopher King, executive director of the Preservation Society of Charleston. “Nobody did it better than Charleston. And they came.”

But the threat of sea-level rise has dampened the giddiness. Mr. Tecklenburg said that in 2019, the Charleston area suffered flooding on 76 days.

Mr. Tecklenburg, a Democrat and Charleston native who took office in 2016, has made combating flooding his top priority, with a broad approach that includes policy changes and massive infrastructure projects. On a recent weekday, he gave a driving tour of the Charleston peninsula, the heart of the old city, in which he largely ignored the inspiring architecture. Instead, he showed off the squads of workers in hard hats.

Some were raising the existing sea wall known as the Low Battery. Some were reinforcing ancient underground drainage canals with concrete. Others were finishing a $198 million drainage project that will eventually move 360,000 gallons of water from downtown streets to the Ashley River.

“You can either do something and try to live with water or pack up and move to Asheville, N.C.,” Mr. Tecklenburg said. “I’m not going to be the mayor who says head for the hills.”

After a while, Mr. Tecklenburg parked in front of a towering 1850s-era home. Overlooking a small urban tidal pond called Colonial Lake, it is a classic example of what is known as a “Charleston single home” — a narrow house with a pair of stacked porches, known as piazzas, running along one side of the building.

It is the house where Mr. Tecklenburg grew up, and the current owners helped set off the new attitude toward elevations when they applied for permission to elevate the place in 2017. The city’s approval marked the beginning of the philosophical shift. Mr. Tecklenburg noted that it was a kind of stealth elevation: The height of the front door, which opens to the lower piazza, did not change much as the building was raised several feet. But new stairs were added just inside the door, leading up to the first porch.

The idea of lifting up buildings in a flood zone is far from exotic. Beach communities and fishing camps have done so for years. In New Orleans, the tradition of elevating homes goes back centuries, picked up after disastrous flooding from Hurricane Katrina in 2005, and continues today: In March, city officials announced that FEMA would spend $8.4 million to elevate 31 New Orleans homes.

But other cities plagued by floods are also seeing the need to elevate notable homes, including Newport, R.I., where a number of homes have been raised since Hurricane Sandy in 2012, and Mandeville, La., where roughly 70 percent of the buildings in the city’s historic district are now elevated, according to Louisette Scott, the former planning director. 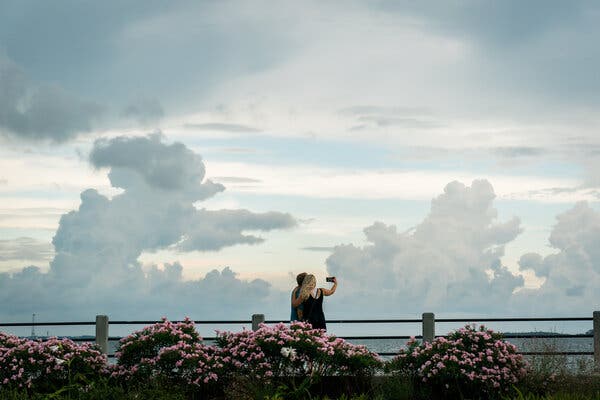 An Army Corps of Engineers project to raise the Battery sea wall is one of many strategies Charleston is using to combat the effects of climate change.Credit…Cameron Pollack for The New York Times 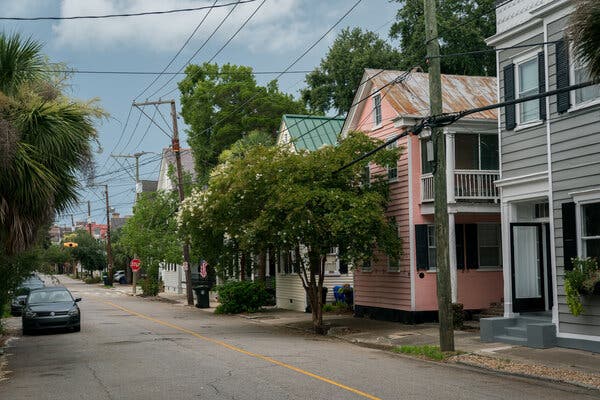 It is expensive work, with the cheapest jobs costing around $100,000. Some subsidies are available, but Mr. Tecklenburg said that finding new financing for working people is an important next step that his administration is undertaking.

For now, the homeowners who can afford the work are enjoying a new kind of prominence.

As the Kaplans stood outside of their newly raised home on Logan Street, a horse-drawn carriage full of tourists passed by.

The tour guide was busy telling the story of how the house got so much closer to the treetops.