On SC’s Jehossee Island, rare remnants of history and big potential for research 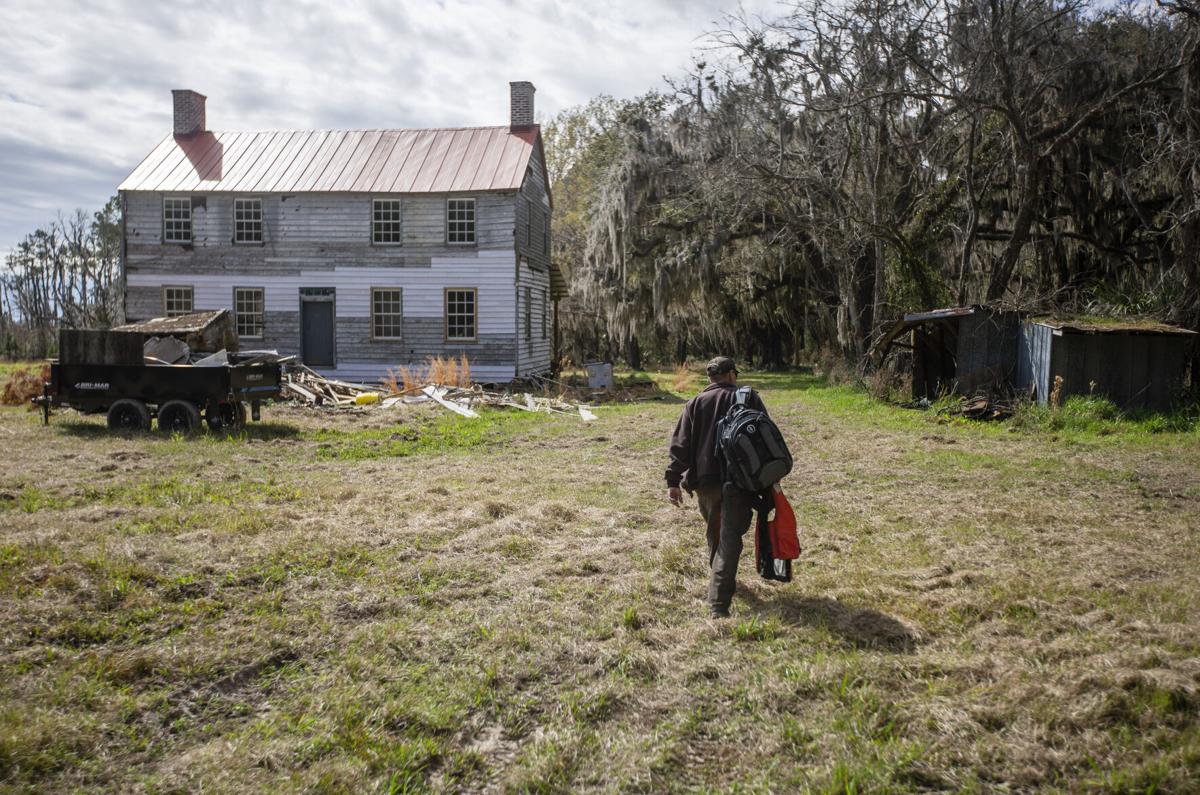 JEHOSSEE ISLAND — This uninhabited island in the Lowcountry’s ACE Basin was the site of one of the largest rice plantations in the South.

Today, alligators swim in what used to be rice fields. Shorebirds fly overhead. In the summer, the air gets thick with mosquitoes.

The entire island is eligible for the National Register of Historic Places as a historic district, and a building still standing from the plantation is one of only a few structures like it in the South, but there are no historic markers or interpretive materials there, and it isn’t open for the public to visit — at least, not yet.

A group of preservation advocates, historians, archaeologists and conservationists have been working to ensure that the historic remains on Jehossee are preserved, researched and interpreted.

Within sight of the house is the only other major structure remaining: a brick rice chimney that was part of one of three mills on the island of about 4,500 acres. 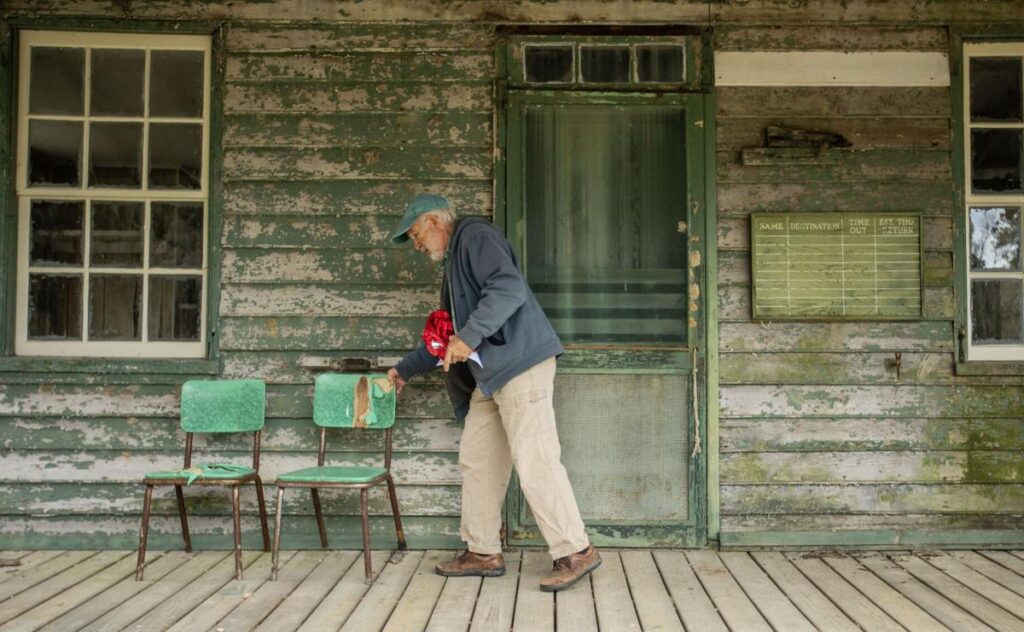 Beekman Webb, lead restoration contractor, locks the door to the overseer’s house at the former Jehossee Plantation on Feb. 28, 2022. The house was turned into a hunting lodge in the 1900s. Gavin McIntyre/Staff

Other remnants are scattered around the island, often hidden from plain view behind forest that’s grown over the years. Between the trees and brush that cover where the main house had been before it burned down, there are clues of what had been there: non-native plants and stone pedestals left over from an ornamental garden, a chimney from a billiard room.

The undisturbed island presents a rare chance to learn about rice cultivation in the Lowcountry and the lives of the enslaved people who shaped the landscape there. Their labor is still visible. Many of the dikes, trunks and canals created for rice production are still intact on Jehossee today and are now part of vital habitat for shorebirds, waterfowl and other species. And, while the homes where hundreds of enslaved people lived are no longer standing, the ground beneath that site likely contains items that would reveal details about their lives.

Since 1993, Jehossee Island has been owned and managed by the U.S. Fish and Wildlife Service. The island is part of the Ernest F. Hollings Ace Basin National Wildlife Refuge, but it is not open for the public to visit.

Before coming under federal ownership, Jehossee had been in the hands of descendants of Gov. William Aiken Jr. of South Carolina, who acquired the core tract of Jehossee Plantation in 1830 from Charles Drayton. Aiken later bought more land, expanding the plantation.

The overseer’s house on Jehossee is believed to have been built around 1830. It’s a rare structure to find still standing, said Brent Fortenberry, director of preservation studies at Tulane University in New Orleans.

The building on Jehossee is one of just 35 overseers’ houses in the country that have been recorded, and it’s one of only four that stands intact, said Fortenberry, who’s leading a team researching the historic resources on the island.

The house survived up to this point, not because its historic significance was recognized, but because it served a purpose. Up until the island came under the ownership of the Fish and Wildlife Service, it was being used as a hunting lodge. In 2018, conversations began on how to preserve and protect the overseer’s house and the brick rice chimney. The need to stabilize the house, in particular, was becoming more urgent, with worsening hurricane seasons and the increasing threat of sea rise.

The nonprofit Preservation Society of Charleston, the ACE Basin Task Force and the Fish and Wildlife Service came together for those conversations and, eventually, the actual planning and funding of the project. Drayton Hall and the Historic Charleston Foundation, which both manage properties connected to Jehossee’s former owners — Charles Drayton owned Drayton Hall in Charleston and Aiken was an owner of the Aiken-Rhett House that’s now a museum in downtown Charleston — were also involved in talks.

Much of the initial work of preserving the house involved removing things that had been added onto the building over the years. An addition in the back of the house was torn down. The metal roof installed over the house’s original wooden shingles was removed and replaced, and vinyl siding was taken off the exterior. Repairs were made to the foundation and original siding, window sashes were replaced and the chimneys were repointed. 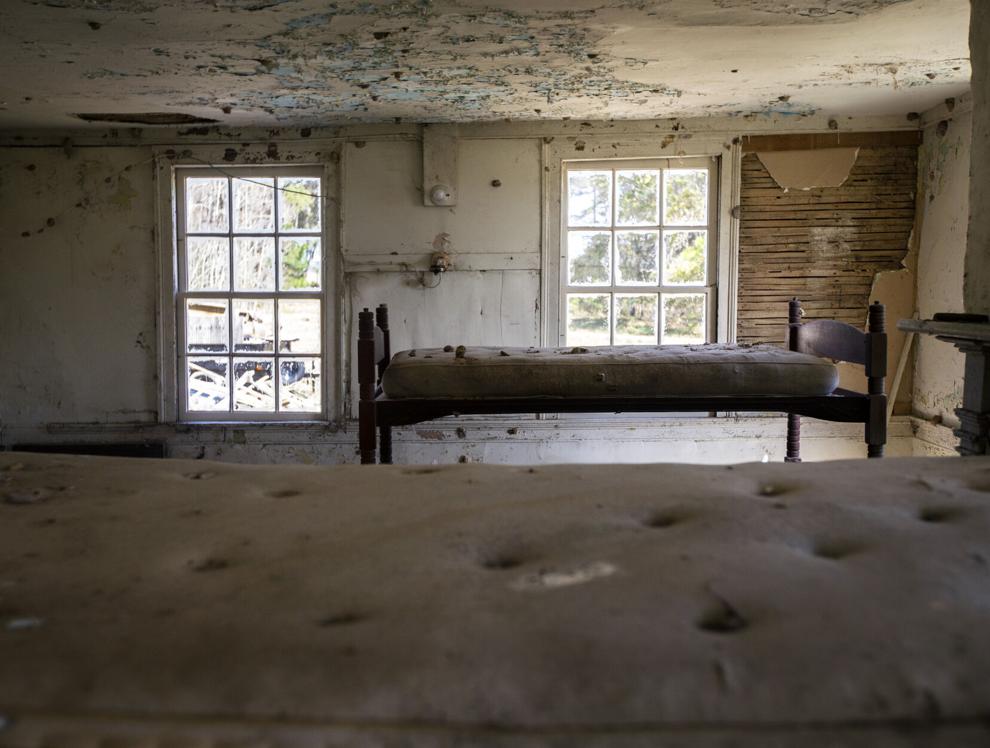 Bunk beds can be seen inside a room at the overseer’s house at the former Jehossee Plantation, Feb. 28, 2022, on Jehossee Island. Gavin McIntyre/Staff

The next step will be painting the entire exterior, said contractor Beekman Webb. Fortenberry’s team is doing paint analysis on the building to determine the original color that was used.

The research team is also working to map out what the nearby mill site would have looked like, and they’ve surveyed the main settlement where Jehossee’s enslaved population lived.

The remains of the settlement offer one of the most significant opportunities on Jehossee for further research, in part, because of its sheer scale.

Jehossee was dependent upon the labor of one of the largest enslaved populations on record. At the time of Drayton’s death in 1820, census records show that there were 40 enslaved people on Jehossee. By 1850, under Aiken’s ownership, that number grew to 897.

An 1843 account from a visitor to Jehossee wrote that those houses alone “may be considered as a large village.” Along with the dwellings, there were two hospitals, a church and a cemetery.

Rice plantations like Jehossee were “a compilation of communities composed primarily of Africans and their descendants,” Antoinette Jackson, an anthropologist with the University of South Florida, wrote in an article published by the International Journal of Heritage Studies in 2008. Jackson wrote that the population of Jehossee while it was a working rice plantation was “95 percent Africans or descendants of Africans.” 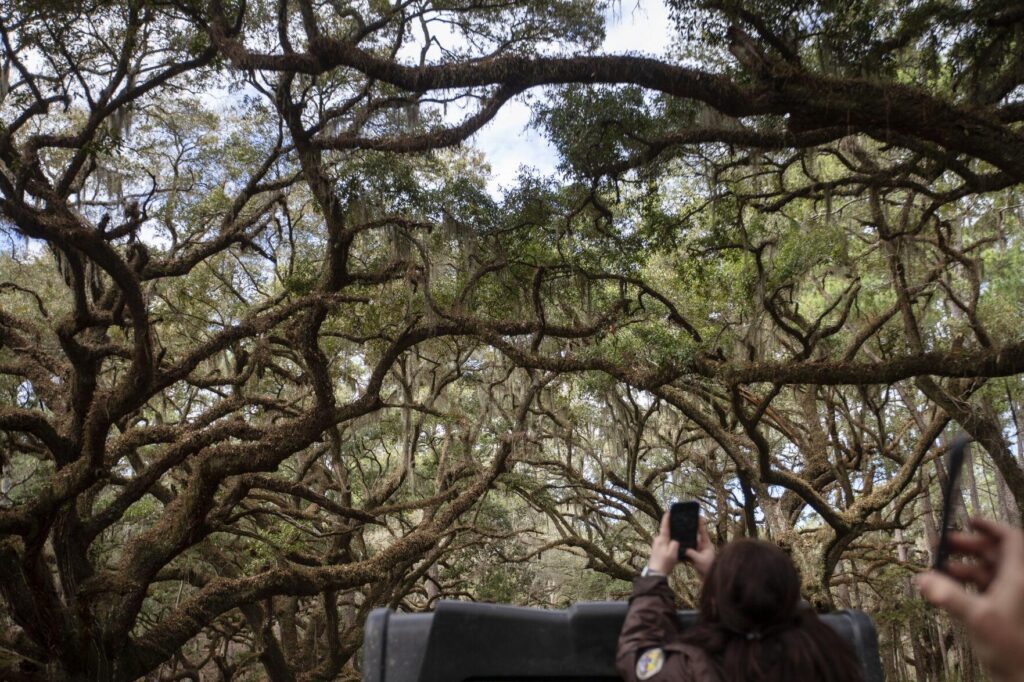 Oak trees planted in the 1800s form avenues across the former Jehossee Plantation on Feb. 28, 2022, on Jehossee Island. Gavin McIntyre/Staff

In the article, Jackson described her visit to Jehossee in 1995 as a “memorable and shocking introduction to African heritage and presence and the lack of public information about it.” She described the island as being of “world-class significance” with “tangible reminders” all over the landscape of when it was a working plantation, yet there were no markers or printed materials about the site’s history on the island or at the wildlife refuge’s visitor center.

One of the main goals of the ongoing project on Jehossee now is to provide that kind of material, informed by in-depth research.

“One of the incredibly important aspects of this project and one of the most significant parts of it is that, at our core, we’re trying to understand the experiences and lifeways of enslaved Africans on the property,” Fortenberry of Tulane said of their efforts.

The potential for archaeological study on Jehossee is vast, said Rick Kanaski, regional archaeologist and historic preservation officer for the Fish and Wildlife Service. An archaeologist could spend an entire career or, really, a few careers, just on Jehossee, he said.

While that potential is exciting, Kanaski said, it has to be pursued with great care.

“You only get one stab at it to do it right,” he said. “You mess up an archaeological site, it’s not coming back.” Remnants of a cistern at the location of houses of enslaved people remains at the former Jehossee Plantation, Feb. 28, 2022, on Jehossee Island. Gavin McIntyre/Staff

Though Jehossee is closed to the public now, there’s agreement there should eventually be more access to the island, especially given that it’s publicly owned.

A 2002 report on Jehossee’s history, archaeological sites and National Register eligibility from the Chicora Foundation, which has served as a key resource for the Jehosee project’s partners, named interpretation and access among the main recommended goals. The “significance of the island’s historic resources cannot be ignored,” it read.

Mark Purcell, manager of the wildlife refuge that includes Jehossee, said he’d like for people to have more access to Jehossee in the future. That access, he said, should include thorough historic interpretation.

“We need partners to do that,” Purcell said. 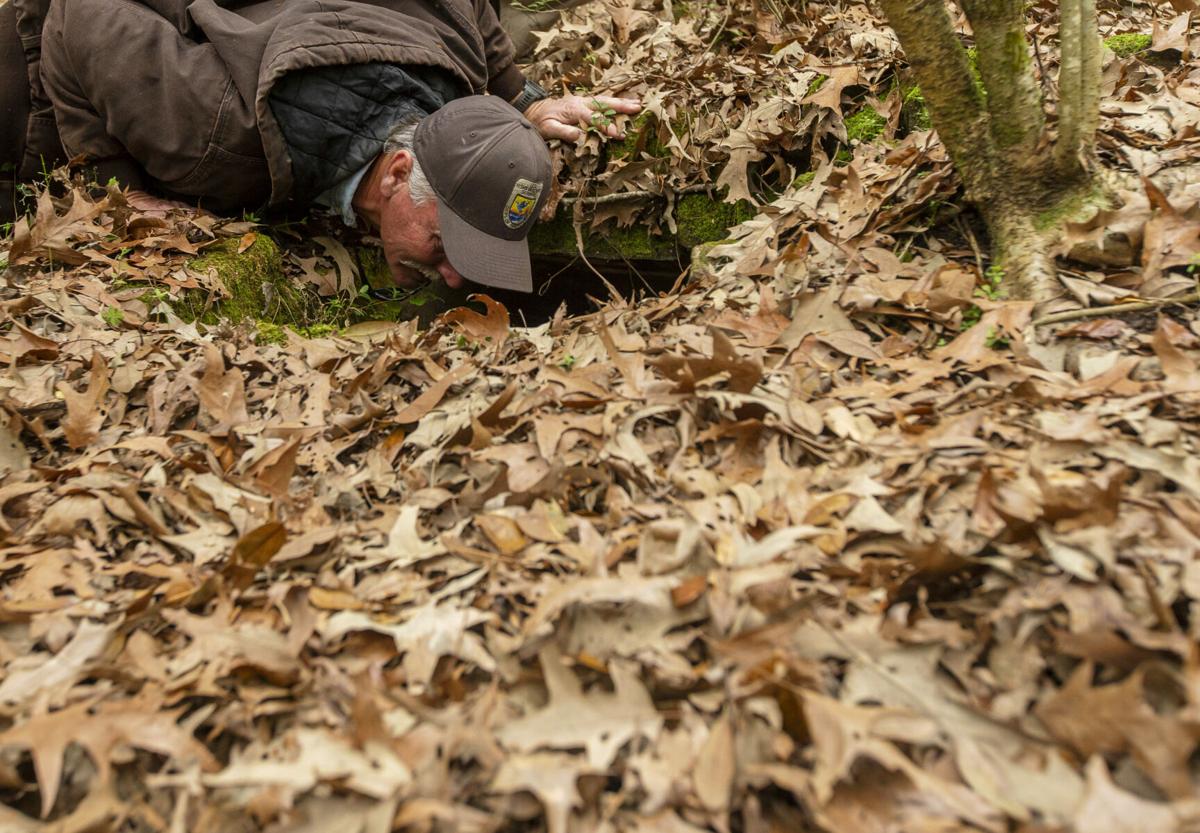 U.S. Fish and Wildlife Service Refuge Manager Mark Purcell looks inside the remnants of a cistern at the former Jehossee Plantation on Feb. 28, 2022, on Jehossee Island. Gavin McIntyre/Staff

Along with groups that are already involved, Kanaski said he sees potential to involve other universities and historic and cultural organizations. He also said efforts at Jehossee could align with those in Charleston at the International African American Museum, which is expected to open later this year. One of the museum’s exhibits will be about rice cultivation in the Lowcountry.

“We want to continue to see this grow and bring in new partners,” Kanaski said. “And this is something that we hope can be replicated elsewhere.”

As the group advances with next steps, which will likely involve pursuing a National Register nomination for the island, they’re looking to continue to bring in other groups and engage descendant communities, said Anna-Catherine Carroll, manager of preservation initiatives at the Preservation Society. They’re both “inviting the property owner to do more and the public to be more engaged,” said Brian Turner, the organization’s director of advocacy.

“This is public land,” Carroll said. “Nobody really gets to speak for the history that exists (on Jehossee) individually.”

Jehossee still likely has a lot to say for itself, too. Beneath layers of paint, in the dirt or hidden behind trees, there’s more to find.