In May the renovated Pullman Artspace Lofts marked the first new multifamily residential development in Chicago’s Pullman neighborhood in more than 60 years. Nonprofit groups Artspace, Chicago Neighborhood Initiatives, and PullmanArts worked to rehabilitate two long-vacant 1880s buildings that once housed workers at George Pullman’s eponymous railroad car business, the Pullman Palace Car Works. A new, 33,000-square-foot building was erected in the space between the two historic structures, where an earlier tenement building had stood until the 1930s. This created a total of 38 affordable live/work apartments for artists and their families, as well as community space for events and exhibits. The Pullman railroad car manufacturing empire once employed tens of thousands on Chicago’s South Side, where George Pullman created one of the nation’s first planned industrial communities. The twin, three-story buildings served as tenement housing for many immigrant laborers at the company but had been abandoned for decades. The $18.9 million rehabilitation, partially funded by federal and state historic tax credits, preserved the buildings’ redbrick exteriors, mansard roofs, and other architectural elements. In 2015, President Obama designated the entire Pullman Historic District a national monument, and the neighborhood is also a National Treasure of the National Trust. —JS 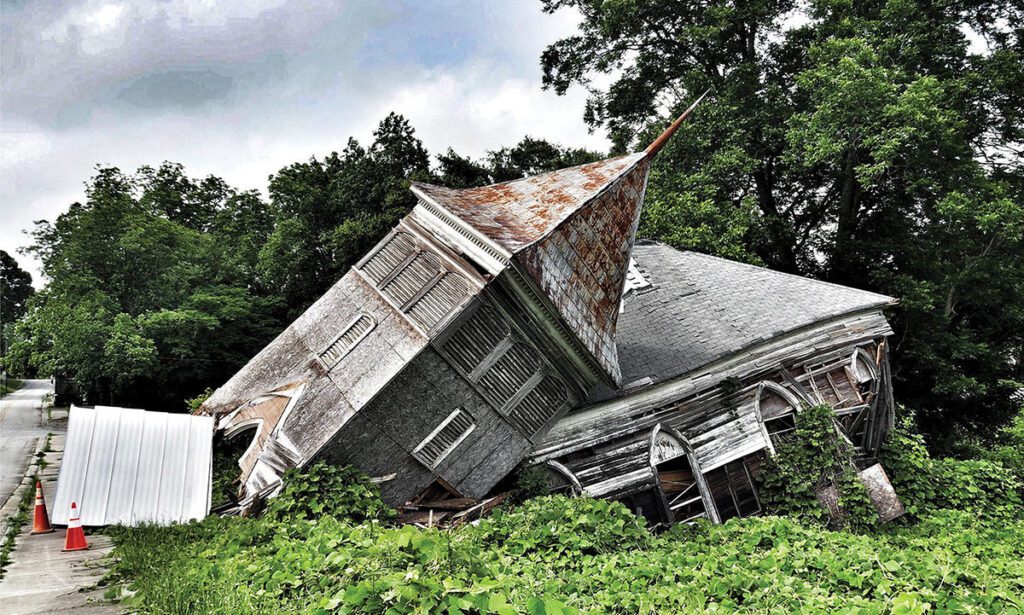 In 1965, three of the four Black churches in and around Tallapoosa, Georgia, were burned, possibly by members of the Ku Klux Klan. Only Whites Chapel AME, built in 1920, was spared due to its protected location in the heart of the town’s Black community. But nearly six decades later, Whites Chapel, which held its last services in the early 1980s, has succumbed to the elements and neglect. “What hatred did not destroy in the 1960s, gravity did 60 years later,” says Dale Gladden of the Tallapoosa Historical Society. In June, the building’s roof collapsed. It was the final blow for the church, where the congregation dated to the 1880s but had dwindled to just a few members a century later. Renee Wallace, 64, had attended the church since she and her mother moved to Tallapoosa in 1964. She recalls the once-handsome building, with its Gothic-style windows and elegant, metal-shingle bell tower. “It was a beautiful structure at one time and it’s just so sad to see it in its current state,” she says. Eventually, after the debris has been cleared, historical society members hope to transform the land into a park, preserving the steeple as a reminder of what was lost. —JS

The two-story Jehlen Building in downtown La Crosse, Wisconsin, was built circa 1886 for French immigrant and butcher Dominic Jehlen, who operated a meat market in the lower level and lived in an upper-level residence. After he retired in 1892, Jehlen’s sons took over the business, and it passed through the family until closing in 1963. Several businesses later operated out of the brick building, including a pizza parlor and a series of bars, but for the past five years or so, it has sat vacant and unmaintained. It retains many of its original features, including a projecting brick cornice, basket weave entrance tiling, and arched window hoods. In early 2021, citing threats to human health and safety, the city issued a raze order for the building, prompting the La Crosse Heritage Preservation Commission to include it on its inaugural most endangered historic properties list. Despite receiving offers to purchase the building, its owner applied for a demolition permit that was granted in April, giving him six months to move forward with his plans. Local preservation advocates fear losing the structure will threaten the integrity of the National Register–listed downtown La Crosse Commercial Historic District, a major tourism draw for the city. —LW

Built in 1910 for Danish immigrant and lumber mill foreman Christian Pallesen, the four-unit Pallesen Apartments building in downtown San Jose, California, was designed by acclaimed local architects Wolfe & McKenzie. It featured custom built-in cabinetry and other details made from wood likely sourced from the nearby Santa Cruz redwoods. Pallesen and his wife, Lillie, lived in one unit of the building, renting the others out to local working-class families. In January of 2019, developer KT Urban purchased the Mission Revival building and two adjoining lots, with plans to build a 27-story luxury condominium complex in their place. Preservation Action Council of San Jose and Habitat for Humanity East Bay/Silicon Valley approached the developer and devised a plan to relocate the building to a vacant city-owned lot less than three blocks away. The COVID-19 pandemic delayed the plans, and eventually the developer began moving forward with demolition, giving the two nonprofits six weeks to raise $300,000 to cover the cost of relocation. Thanks to an outpouring of support from local donors, the money was raised; on March 28, 2021, people gathered on sidewalks to watch the building make the 30-minute journey to its new lot. Habitat for Humanity will soon begin rehabilitating the apartment building, which has retained most of its original features, and will eventually sell the four units at less than half of market value. —LW 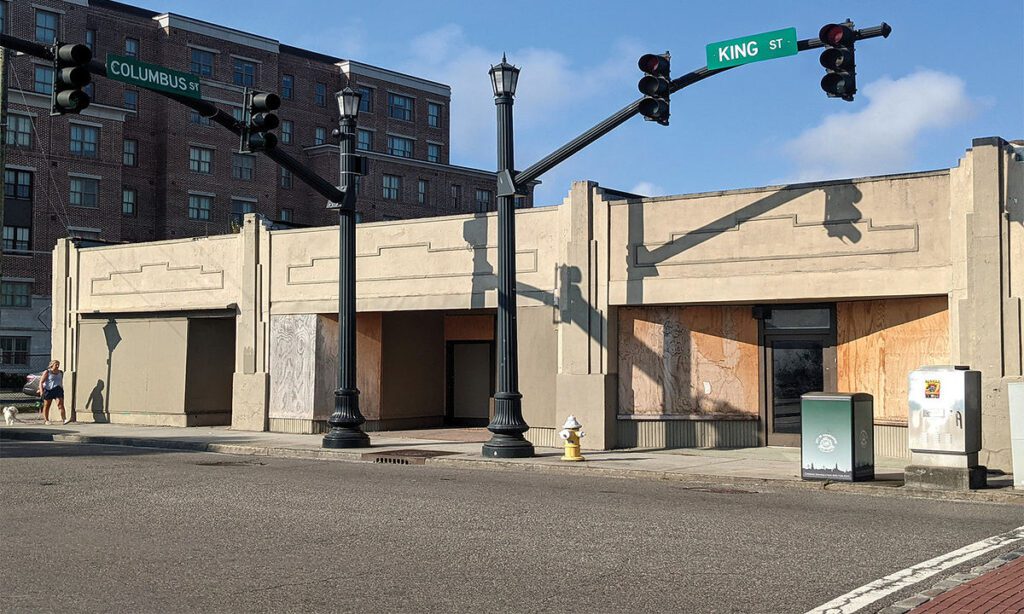 An unusual one-story, Art Deco–style building could be demolished to make way for a seven-story senior living facility on Charleston, South Carolina’s upper King Street, roughly a mile northwest of the city’s historic center. The building, designed by notable local architect Stephen Thomas and constructed in 1937, is the last remaining historic structure on this section of King Street. The area was once an important center for Black and immigrant communities in Charleston during the 19th and early 20th centuries. Consisting of three separate storefronts, the building has housed tenants over the years that have reflected the neighborhood’s diversity: a Polish-owned clothing store, a Chinese-owned laundry, a Greek-owned restaurant, and a Black-owned barber shop. The Preservation Society of Charleston has advocated for the building’s preservation and has worked to persuade the developer, Liberty Senior Living, to incorporate the structure into its design plans. As of press time, Liberty was considering an option to do so, but no firm decision had been made. —JS