In 2013, we established the Thomas Mayhem Pinckney Alliance to identify, recognize, and preserve not only the contributions of African Americans to the built environment of Charleston and the Lowcountry, but also those places that are significant to the African American experience.

Thomas Mayhem Pinckney is a relatively unsung yet integral, early player in the preservation movement in Charleston. Pinckney was born in 1877, son of cabinetmaker Nathaniel Pinckney. Educated in Charleston’s public schools and at Clark University Night School, he trained as a stair maker with Luther Alston, another local contractor, before beginning an apprenticeship with Snelson Contracting Co., builders of the Old City Jail and the Convent of Our Lady of Mercy on Legare St.

Specializing in historic structures, Pinckney was one of the most prized artisans of his day, and he employed and trained numerous other African American tradesmen. His early work led him to start his own contracting firm where he received much of his business from Susan Pringle Frost, the founder of the Preservation Society of Charleston. Pinckney was highly skilled in hand-carved woodwork and was particularly adept at sunburst mantelpiece carvings. Some of the houses bearing his work include the Caspar Christian Schutt House at 51 East Bay, the Colonel John Ashe House at 32 South Battery, the Miles Brewton House at 27 King Street, the Pirate House at 143-145 Church Street, 48 and 100 Tradd Street, and all of Stoll’s Alley. In addition, Pinckney restored Mansfield Plantation near Georgetown and even won first place in a Grand Central Place show in New York City for a scaled wooden model of a typical colonial room.

Susan Pringle Frost had such a productive business relationship with Pinckney that she dubbed him her “right-hand man.” Sidney Bland, in his book Preserving Charleston’s Past, Shaping Its Future,describes Pinckney’s work as “so in scale and period that one has to be told what is not original to the house.” Frost’s encomium for Pinckney, which appeared in the News and Courier following his death in 1952, commemorated the craftsman’s profound impact on Charleston’s historic residences:

“There has passed to the higher life one who, in his day and generation made such and outstanding contribution to the preservation of the early architecture of our city which has made Charleston so noted throughout the country that I ask to pay him this tribute in your columns.

I have often been given credit for the work I did in restoring the old time architecture. But more credit should be given to Thomas M. Pinckney. He was a real artist in his work of restoration of the old time wood carvings in our splendid old homes…” 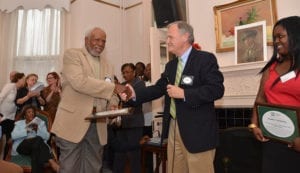 Created to honor African American craftsmen, their contribution to the built environment, and their perpetuation of the building arts. 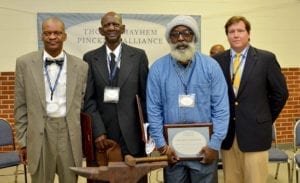 On April 25, 2015, the Alliance hosted its second Craftsmanship Awards, recognizing three master ironworkers for their enrichment of Charleston’s built environment and tradition of building arts: 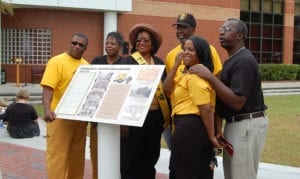 C. A. Brown High School opened on September 4, 1962, the result of a final effort by Charleston County school board officials to resist integration by building new schools for African-American students. Originally called East Side High, it was renamed for school board chairman Charles A. Brown, who died while the building was under construction. Architect Leonard C. Gaines designed the two-story structure, which featured brick veneer, a flat roof, and large windows—all trends in educational planning and school design in the mid twentieth century.

In 1896, the United States Supreme Court had ruled that segregation was permissible as long as equal facilities were provided for both races. For more than fifty years, it was legal to bar people of color from sharing schools and other public facilities with whites. But in December 1951, the NAACP filed Briggs v. Elliott, a class-action suit that asked the court to end the practice of segregating South Carolina public schools. Thurgood Marshall and the dissenting Judge Waring argued that the schools provided for black students were far inferior to those provided for white students and that segregation itself was harmful.

In 1952, the court ruled that schools must be “equalized” but not integrated. School districts across the South poured money into segregated schools for black students, which later came to be known as “equalization schools.” Briggs eventually became part of Brown v. Board of Education, the 1954 landmark case in which the U.S. Supreme Court ruled segregation illegal and mandated integration. Between 1951 and 1962, the Charleston County School Board constructed at least 25 new schools.

When it opened in 1962, C. A. Brown’s 57 classrooms served 1,500 students. Parents, teachers, and students embraced the state-of-the art facility despite the motives for its creation. They put their own stamp on the school by writing the alma mater, choosing a panther mascot, selecting the school colors, and creating a culture of service and aspiration that produced national and community leaders.

The equalization era ended in 1963, when a federal court mandated the desegregation of Charleston’s school system. C. A. Brown closed in 1982. Since 1984, this building has been the home of Trident Technical College’s Palmer Campus.

In 2013, the Alliance commemorated five places integral to the Civil Rights movement in Charleston by sponsoring South Carolina Department of Archives and History historical markers at each site. 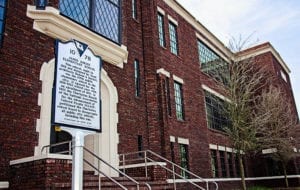 This school, built in 1919 and designed by local architects Benson & Barbot, was the fifth public elementary school in the city. It opened for the 1919-1920 school year with an enrollment of 600. In 1955 the Charleston Branch of the National Association for the Advancement of Colored People (NAACP) petitioned the Charleston school board to desegregate all public city schools including this one. In 1960 nine parents, with support from the NAACP, applied for their children’s transfer to four white schools, including James Simons Elementary School. Denied by the board and on appeal, they sued in federal court in 1962 and won their case the next year. On September 3, 1963, eleven black students entered this school and Memminger Elementary School and Charleston and Rivers High Schools. 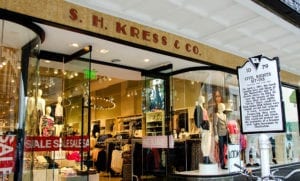 This three-story Art Deco building, built in 1930-31, was a 5- and 10-cent store owned by S.H. Kress & Co. until 1980. Kress, with about 400 American stores, designed its own buildings. This store features a yellow brick facade with colorful and decorative glazed terracotta details typical of Kress’ Art Deco designs. A 1941 two-story addition faces Wentworth Street. McCrory Stores bought this building in 1980, operating it under the Kress name until 1992. On April 1, 1960, the lunch counter here and those at the Woolworth’s and W.T. Grant’s stores on King St. were the targets of the city’s first civil rights “sit-in.” Black students from Burke High School were denied service but refused to leave. Arrested for trespassing, they were later convicted and fined. This youth-led protest was the beginning of a broader civil rights movement in Charleston. 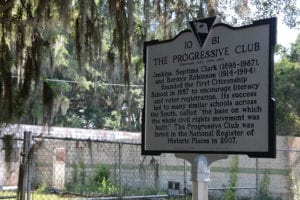 The Progressive Club, built in 1962-63, was a store and community center for Johns Island and other Sea Islands until it was badly damaged by Hurricane Hugo in 1989. The club had been founded in 1948 by civil rights activist Esau Jenkins (1910-1972), who worked to improve educational, political, economic, and other opportunities for blacks on the island and in the lowcountry. Jenkins, Septima Clark (1898-1987), and Bernice Robinson (1914-1994) founded the first Citizenship School in 1957 to encourage literacy and voter registration. Its success led to many similar schools across the South, called “the base on which the whole civil rights movement was built.” The Progressive Club was listed in the National Register of Historic Places in 2007. 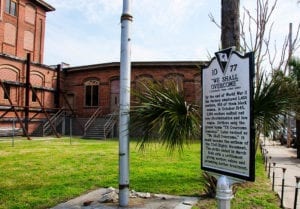 This five-story commercial building, built ca. 1882 as a textile mill, was known as the Charleston Manufacturing Company, then Charleston Cotton Mills in its early years. Leased to the American Tobacco Company in 1903, the plant was sold to that company in 1912. Popularly called “the Cigar Factory,” it made cigars such as Cremo and Roi-Tan until it closed in 1973. The Cigar Factory was listed in the National Register of Historic Places in 1980. By the end of World War II the factory employed 1,400 workers, 900 of them black women. In October 1945, 1,200 workers walked out over discrimination and low wages. Strikers sang the gospel hymn “I’ll Overcome Someday.” Later revised as “We Shall Overcome,” it would become the anthem of the Civil Rights Movement. The strike ended in March 1946 with a settlement giving workers raises and promising better treatment. 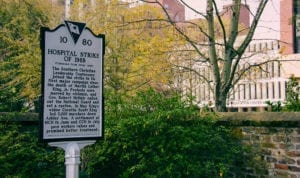 Civil rights marches along city streets such as Ashley Avenue were a dramatic part of strikes at two hospitals from March 20 to July 18, 1969.  Black workers, most of them women, walked out of the Medical College Hospital (MCH) on Doughty Street and Charleston County Hospital (CCH) on Calhoun Street over discrimination and low wages. Some picketers were arrested, the state of South Carolina refused to sanction a union, and talks stalled. The Southern Christian Leadership Conference joined the strike in its first major campaign since the death of Martin Luther King, Jr. Protests were marred by violence, and Gov. Robert McNair called out the National Guard and set a curfew. In May King’s widow Coretta Scott King led 5,000 marchers down Ashley Avenue. A settlement at MCH in June and CCH in July gave workers raises and promised better treatment. 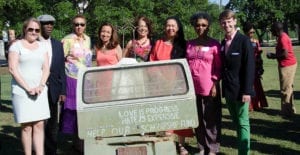 On June 1, 2014, the Alliance orchestrated a ceremony to bid adieu to the door of Esau Jenkins’ old Volkswagen van, an iconic piece of African American history. Jenkins, notable Lowcountry civil rights activist, transported countless Johns Islanders to the Peninsula for training, education, and work. The door, which bears the words “Love is Progress, Hate is Expensive,” was sent to Washington DC for safe keeping at the Smithsonian until the opening of the National Museum of African American History and Culture in September of 2016.

Additionally, in September of 2016, we partnered with the City of Charleston, the Jenkins family, and Charleston Country Public Schools to organize an event to commemorate the legacy of Esau Jenkins and warmly send off his family as they began their journey to Washington DC for the grand opening of the National Museum of African American History and Culture, the new home of their beloved patriarch’s iconic VW door.