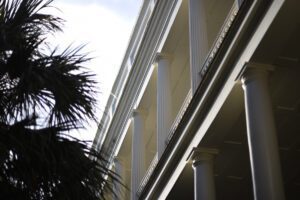 Guests will visit 4-6 private Piazzas and/or Gardens. No interiors are included. The original plans for Charles Town’s development did not include streets along this low-lying area today known as the Battery. Strolling along the Battery’s promenade takes you back in time since the area has hardly changed in the past few centuries. Today, cannons and piles of cannon balls remain as a testament to the Civil War. White Point Garden, at the southernmost tip of the peninsula, has a history of pirates who were hanged from oak trees and gallows in the early 1700s and left dangling as a deterrent to other pirates entering the harbor. A seawall protects East Battery, or High Battery, which overlooks Charleston’s harbor. The forerunner of today’s sea wall was first constructed in 1755 but was destroyed by a hurricane. Subsequently, constant battering from waves required the wall to be rebuilt a number of times. Because of the marshy nature of the land, however, it was not possible to build continuously along East Battery until after 1820 when most of the mansions along the thoroughfare were constructed. When Confederate troops fired on Fort Sumter on April 12, 1861, Charlestonians gathered on the High Battery and along piazzas and rooftops to witness the first shots of the Civil War. East Battery has been a popular promenade since the 19th century.