The Economics of Historic Preservation 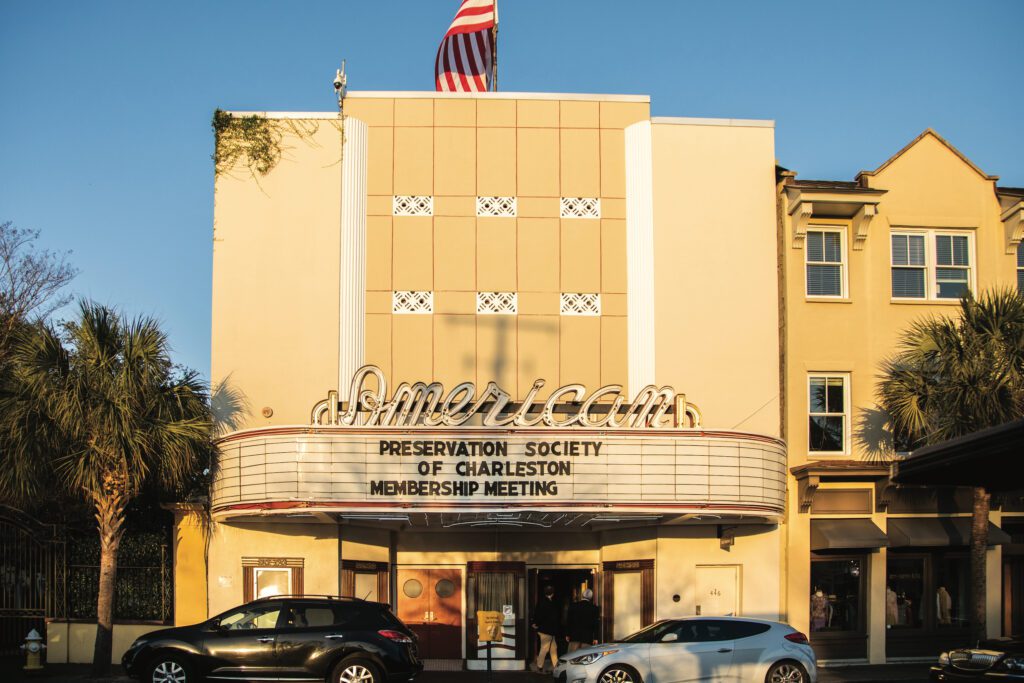 This article recounts some of the data Donovan Rypkema shared in a point/counterpoint fashion. By debunking myths, it becomes clear why preservation has such a strong base of support. This is not an assertion that we are always perfect; when critique is due, we must embrace it and improve. In this spirit, we are committed to our shared heritage of a common bond for Charlestonians.

On February 24 the PSC welcomed Donovan Rypkema as a guest speaker at the Winter Membership Meeting. The historic American Theater on King Street was at capacity, and it was a fitting location to discuss the role historic buildings play in downtown revitalization.

Mr. Rypkema is principal of PlaceEconomics, a private sector firm with decades of experience analyzing the economic impacts of historic preservation. With experience in cities large and small throughout the country, their cumulative research offers compelling evidence for preservation’s role as an economic development strategy.

The presentation, entitled “Historic Preservation and the Local Economy,” featured a blitzkrieg of some of the most significant data the firm has compiled. Their reports are typically analytical and stop short of providing recommendations. That role falls to local preservation advocates who can use the data to convince decision-makers that local investments in historic preservation have paid off and will continue to pay off.

Rypkema explained that several high-profile critiques of preservation, including one recently published in Forbes, decry its impacts without defensible data. While his firm has not done Charleston-specific research, its findings from other cities are highly relevant. Our community, for instance, has recently grappled with questions over the scope of BAR authority and how to better enforce permit conditions. Comparative data showing the positive results of strong preservation policy empowers us as we make the case for why public investments in the stewardship of historic assets is a worthy effort.

This article recounts some of the data Rypkema shared in a point/counterpoint fashion. By debunking myths, it becomes clear why preservation has such a strong base of support. This is not an assertion that we are always perfect; when critique is due, we must embrace it and improve. In this spirit, we are committed to our shared heritage of a common bond for Charlestonians.

Further, older neighborhoods attract new jobs at a disproportionate rate. In Nashville, the firm found that 40% of job growth occurred in its historic districts compared to 9% in the rest of the city. There has also proven to be a catalytic impact of investment in neighborhoods when “anchor” historic properties are rehabilitated. This trend has been measured by examining the relative population growth and building permit applications filed. Rypkema shared the example of Rouses Market in Mid-City New Orleans where his firm measured cumulative investments in the area following the renovation.

Myth #2: Historic sites are a drain on city budgets

Counterpoint: Research has proven that “heritage tourists,” or those who visit to focus on a place’s history, bring greater value to a community than visitors for other purposes. In several cities the firm documented that this type of visitor spent considerably more than “non heritage” visitors on lodging, transportation, food and beverage, retail and recreation. These statistics reveal that even if dollars are not being spent on the heritage sites that attracted them, their impact resonates in the economy in other way. In Utah, for instance, less than 7% of heritage tourism dollars were spent on the sites that attracted them.

Counterpoint: Protection of historic districts has consistently resulted in greater appreciation of home values over time and more resilience during economic downturns. This may not be a surprise to Charlestonians where realtors commonly tout historic materials and design as a value-added asset (though maybe not commonly enough). Yet the data is important to counter charges that excessive regulation adds undue burdens on historic property owners. These arguments are particularly noteworthy for older neighborhoods that do not have the benefit of protections as they may be more vulnerable to cyclical economic downturns.

The foreclosure market offers further supporting data about the lower financial risk of owning protected historic properties. During the 2008-2013 time period in Raleigh, North Carolina, local districts had 28.8 foreclosures per 1000 households compared to the citywide average of 100 per 1000 households. This premise also held up in San Antonio where foreclosures in all nine of its historic districts were less than or, in one case, equal to the citywide average.

Counterpoint: Trends have made clear in recent years that historic commercial corridors are more economically resilient. In a study of historic Main Street Districts in North Carolina, data proved that the ratio of business openings to closings was substantially higher through time with data extending from 1993 to 2018.

Further, start-up and younger businesses are increasingly attracted to older neighborhoods. In Saratoga Springs, New York, PlaceEconomics found that the large majority of jobs in historic districts were smaller firms with less than 50 employees and young firms less than three years old. In Nashville, historic districts contain just 3% of all jobs, but 11% of all job growth. Further, the districts had 13% of the cities start-up jobs and 15% of all small business jobs.

Counterpoint: From city to city statistics show that younger populations are favoring older and historic housing. In Los Angeles a majority of those living in its historic districts are between 25 and 34. And in Nashville, a disproportionate amount of millennials choose to live in its historic districts. PlaceEconomics has studied the trends nationwide and found that, while millennials represent just 34% of all home buyers, they represent 59% of buyers of pre-1912 houses.

Counterpoint: The greenest building is the one that is already built. In calculating the costs of constructing even the most environmentally responsible new buildings, the environmental cost of materials flow is frequently an afterthought. This is problematic given the landfill debris created by demolition. In Los Angeles, a 2,000 square foot house demolished generates 84 tons of debris. And more than a quarter of the waste in Los Angeles landfills has been found to be from construction debris.

Rypkema detailed the work his firm did to quantify the benefit of conserving the Cass-Mead Building in Providence, Rhode Island versus tearing down and building anew. Understanding the environmental benefit of preservation vs. replacement required investigation into a variety of metrics, including vehicle miles traveled and the value of its embodied energy in BTUs. They ultimately calculated that the infrastructure investment saved between $400,000 and $640,000, prevented 2,000 tons of debris from entering the landfill, and conserved $80,000 in natural resources.

Further, older neighborhoods are far less car dependent as many historically relied on walkability as a basis of their value. PlaceEconomics documented that historic districts in Savannah were highly walkable to places where most daily errands can be accomplished.

Counterpoint: Density in historic districts often far outpaces the density in other parts of urban areas. PlaceEconomics found in Indianapolis that the population per square mile in historic districts was almost 25% greater than the rest of a compact area of the city they studied. The trend is even more significant in Raleigh where local historic districts are more than twice as dense as the rest of the city. The firm compared the 1925 Oakwood neighborhood to a 1992 neighborhood of the same size called Reedham Oaks/Wyndhom. Both are roughly 114 acres and their survey found the older neighborhood to have more than triple the population of the newer one.

Another factor affecting density is vacancy rates. In Indianapolis, Rypkema’s team found that abandoned housing was far less frequent in historic districts: 1.8% compared to 5% in the City as a whole.

Myth #8: An incidental impact of creating a historic district is racial and economic homogeneity

Counterpoint: In studies of historic districts in Indianapolis, Los Angeles, San Antonio and Phoenix, Rypkema’s team found a wider diversity of ethnic and racial backgrounds in historic districts as compared to the rest of the city. This fact has important implications with respect to the disproportionate rise in values associated with districting. Homeowners stand to benefit from increases in value, but renters, disproportionately persons of color, may be more vulnerable to displacement resulting from corresponding price changes.

While mindful of the potential impact, Rypkema says that a direct cause/effect relationship between historic designation and higher eviction rates has not borne out. In Miami-Dade County, the team found that renters in historic districts actually have less of a housing cost burden compared to the rest of the city (57% to 62%, respectively). The same was true in Los Angeles where the team also found that its districts only sparsely overlapped with a detailed map of gentrified areas.

Regardless, housing affordability is an important topic of discussion in preservation. To remain strong and relevant as a movement we must invite strategies that limit displacement pressure. Given the major affordable housing shortage in Charleston, we must look for opportunities to support well-integrated infill that adds density while respecting the built environment.

Comparative models in other communities also encourage us to think creatively about how we give greater weight to the cultural significance of our neighborhoods and not simply architecture. One compelling recent example is Historic Denver’s work to create a unique conservation plan to limit displacement in the historically Chicano La Alma Lincoln Park neighborhood, profiled in the National Trust’s Winter 2022 Preservation Magazine.

Counterpoint: The urban core of Charleston, like many American cities, declined in population in the mid-20th Century. But that trend re-shifted in the 1990s according to our 2021 Comprehensive Plan Update. Since then, the peninsula has been steadily gaining population with increasing demand to live close to jobs and other amenities.

PlaceEconomics has conducted several studies that show how, as cities re-urbanize, population growth is rising at a faster rate in historic districts and that older neighborhoods are attractors of growth. In Philadelphia, between 2000 and 2012, historic districts gained over 12,000 residents while the rest of the city lost nearly 4,000. Pittsburgh saw a similar trend in this time period. Its overall population declined nearly 10% overall, but historic districts grew by nearly 4%.

Counterpoint: Preservation is often misperceived to be a movement focused on halting growth. In reality, it is a land use philosophy which values managed change. In a study of Savannah’s historic districts, Rypkema’s team found that new construction expenses actually exceeded rehabilitation expenses. A similar trend held in Los Angeles where expenses for additions and new constructions outpaced rehabilitation expenses in historic districts.

Counterpoint: Consistent with data about property values in historic neighborhood, land values per acre have been proven higher than city averages. In Miami and Indianapolis, for instance, land in historic districts was found to be approximately four times the city average.

In Savannah, Rypkema put it in practical terms, the preservation premium resulting from the higher land value meant the School District could pay the salaries of 86 teachers. The County could pay a fourth of the annual budget of the Sheriff’s Office. And the City could provide a $200/month rental subsidy every month for 1,283 families.

Rypkema’s presentation brought home that there is ample reason to celebrate the successes that have accrued to communities that embrace strong preservation policies. It also served as a reminder for why the preservation movement has evolved to celebrate more than just outstanding examples of architecture, but vernacular older neighborhoods built to last. The values inherent in our historic assets have become impossible to ignore for economists and environmentalists alike, even if they are hard to measure.

For good reason, preservation is a big tent movement that has achieved longevity in local land use policy throughout the nation and found adherents on all sides of the aisle. As it continues to evolve and adapt to meet our future challenges, advocates for the cause are bolstered by seeing the data-driven proof of its effects.