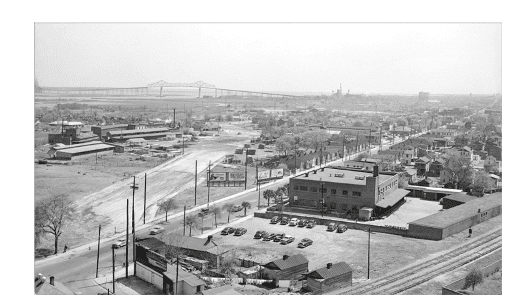 If you’ve traveled north on the peninsula lately, its impossible to ignore the explosion of construction activity occurring in this part of the city. Specifically, several new, large-scale developments have broken ground along Morrison Drive, making this an apt time to check-in on the major projects coming online, and contemplate this area’s future growth.

Dubbed “NoMo,” or North of Morrison, there is a new district forming on the Charleston Neck, which is generally bounded by Huger Street to the south, Greenleaf Street to the north, Meeting Street to the west, and the Cooper River on the east. Historically, this area was comprised of several small plantations, which later gave way to farms, residential subdivisions, and industrial uses by the end of the 19th century. Much of the area east of current-day Morrison Drive was marshland until private rail companies starting filling in land for rail lines to bring goods from surrounding industries to Charleston’s wharves for export. This facilitated the establishment of several phosphate and lumber companies in the upper peninsula, as well as the construction of brick industrial buildings along the Cooper River, including a coal tipple and facility for the Standard Oil Company.

The road now known as Morrison Drive was created around 1950 when East Bay Street was extended northward. The corridor quickly became a center for auto-dealerships, while continuing to serve as a largely industrial part of the city. However, over recent decades, Morrison Drive has begun to attract diverse, vibrant uses such as breweries, restaurants, office complexes, and multi-family housing developments. The high concentration of technology companies that have chosen to locate to Morrison Drive has also earned it the nickname the “Creative Corridor.”

The uptick in development can be attributed to the upper peninsula’s close proximity to the historic district and easy access to nearby suburbs such as Mount Pleasant and West Ashley, but is also being driven by incentives provided by local zoning and federal legislation. In 2015, the commercial areas in the Upper Peninsula between Huger and Milford Streets were rezoned to encourage growth, offering height and density bonuses in exchange for added community benefits, such as workforce housing, public open space, and storm water improvements. Additionally, Morrison Drive is located within a massive Opportunity Zone that extends from the Crosstown into North Charleston. Created by Congress as part of the 2017 Tax Cuts and Jobs Act, Opportunity Zones provide developers significant tax savings to promote economic development in low-income urban and rural areas.

Generally, the PSC supports greater density for this area, but in exchange, feels new development should follow principles of good urbanism, utilize the highest quality design and materials, and offer meaningful public benefit. As we are seeing bigger buildings rise along this corridor, at a rate faster than ever before, we must be vigilant to ensure the upper peninsula develops with a cohesive, thoughtful vision. 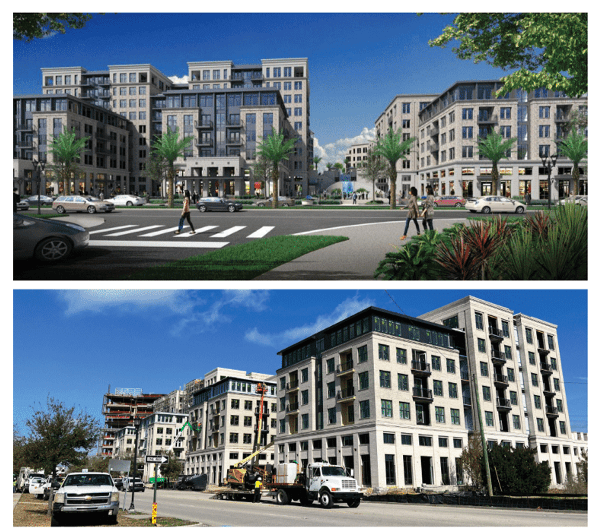 The Morrison Yard project is shaping up to be one of the most impactful developments, not just for Morrison Drive, but for Charleston as a whole. Situated near the foot of the Ravenel Bridge, the project is comprised of an office and housing component and is quickly beginning to dominate views as you approach downtown from Mount Pleasant. The underlying “Upper Peninsula” Zoning allows for up to 12 stories, if certain community benefits are incorporated, such as affordable housing, active ground floors, sustainable infrastructure, etc. Both sites took advantage of the incentives for additional height and density.

Proposals for designs of the two buildings first appeared on the scene in early 2019 and went through several rounds of review with the Board of Architectural Review (BAR). The office building in particular struggled with approvals, initially being denied for height, scale, mass and architectural direction, but came back with a much-improved design, and both projects ultimately received final approval in November 2019. In our advocacy, the PSC worked with the design teams and BAR to enhance public spaces, connectivity to adjacent wetlands, and relationship of materials and details to the context.

The office building at 850 Morrison followed a more contemporary design direction and is undoubtedly the more conspicuous of the two developments, standing at 12 stories high. Based on its location near ports along the Cooper River, the building’s architecture incorporates shifting masses that evoke the idea of stacked shipping containers. An elevated base provides views under the building to the marshes beyond, with seven stories of office space and a penthouse deck for events above. The ground floor also hosts retail uses surrounding an open public plaza.

The residential development just to the south at 838 Morrison drive contains 386 apartment units, as well as ground-floor commercial space. The site is broken up into two primary building masses at the north and the south ends, which are further modulated into a 10-story high rise portion toward the back of the site that steps down to a 6-story mid-rise portion as it approaches the street. The design for the apartments is more traditional and utilizes materials more familiar to Charleston, such as brick, metal and glass. 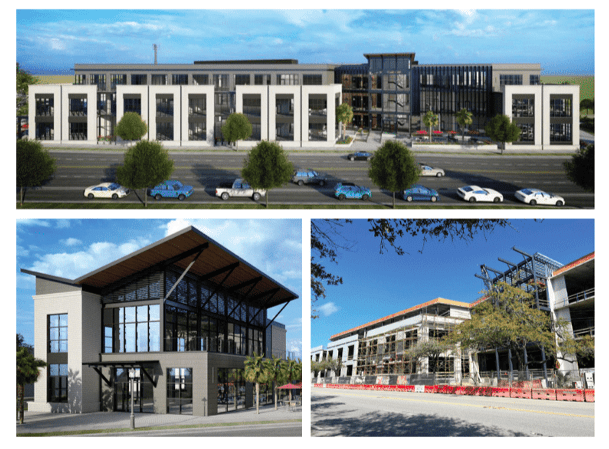 Just a few blocks north of Morrison Yard is another building under construction that is considerably smaller in scale than many of its contemporaries. Known as “The Morris,” the project includes a main 3-story office building at 1080 Morrison Drive and smaller 2-story retail building at 1090 Morrison Drive, connected by an open courtyard. Notably, despite being in a district that allows for some of the greatest heights on the peninsula, the developer elected to keep the scale of these structures relatively modest.

Granted final approval by the BAR in November 2019, the PSC weighed in favorably on the design throughout the process. We felt the project was a refreshing change from the typically much larger-scale proposals that come before the Board, attempting to maximize their zoning envelopes. The office building shields a 350-car parking garage, and includes large windows, terraces, and private balconies. The PSC was pleased the project team responded to our suggestions by introducing more vertical elements to help break up the building’s horizontal emphasis, which we felt resulted in a successful design.

The smaller building at the corner of Brigade Street is outfitted to house a restaurant on the first floor and office space with a private balcony upstairs. Seating for outdoor dining will be located in the adjacent courtyard. Though related to the office in materials and details, this building has more distinctive features including a butterfly roof form that will help it serve as an interesting gateway building as you drive into the city down Morrison Drive. 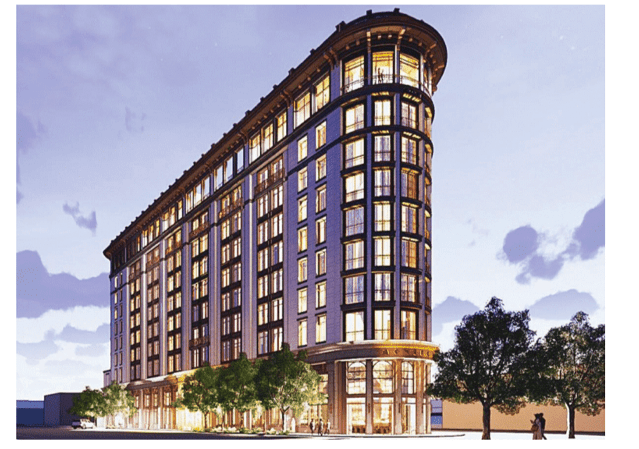 Even further north, at the triangular-shaped site where Morrison Drive converges with Meeting Street, a new hotel is slated for construction. The property received approval to rezone into the Accommodations Overlay in May 2019, and immediately entered the design review process. After gaining initial BAR approvals the same year, the project experienced delays due to COVID, but returned to receive final approval in February 2022.

When built, the hotel will certainly be a highly visible, and defining building for the district. The unique shape of the lot lent itself to the proposal for a flatiron building design. “Flatiron buildings” are a historic building archetype found in many cities across America. These structures were the product of new technology available at the end of the 19th century with the advent of steel frame construction, which allowed for greater flexibility in building form. Where streets converged at odd angles, building footprints could be maximized to fit awkwardly shaped lots. The often-resulting wedge-shaped structures have become a point of architectural fascination, called “flatiron” due to their resemblance to old cast irons for clothes.

Called “The Thompson,” the hotel will stand at 10 stories tall, house 191 rooms, and offer amenities including a café and restaurant on the 1st floor, as well as a bar, meeting space, and outdoor terrace on the top floor. The PSC was generally encouraged to see a traditionally designed building for this area, and presented comments that served to enhance material and detail execution. We are hopeful the building will provide a positive gateway experience as you enter Charleston, but there is no doubt its prominent form and height will have significant impacts on the surrounding context.

The Future of Upper Peninsula Development

Some developments taking shape on the far reaches of the peninsula’s urban boundaries are giving indication of what we might anticipate for future development in this area. Notably, the new 8-story mixed-use apartment complex at 1304 Meeting Street is a stark contrast to the 1-story Santi’s restaurant that has long occupied the site directly adjacent. Crossing over into Design Review Board territory above Mount Pleasant Street, the design received approval in 2018 and has been under construction this past year. Containing over 300 apartments with ground floor retail, this building serves as a strong visual for the type of scale and density of development that is sure to soon occupy much of the upper peninsula.

The Charlotte-based developer of 1304 Meeting, LMC, is now eying an even larger residential venture for 1142 Morrison Drive, located just one property to the south and currently home to the International Longshoremen’s Association (ILA) Hall. Constructed in 2002, the ILA headquarters was one of the first modern investments in Morrison Drive, paving the way for future development along the corridor. Designed by Harvey Gantt, Charleston native and first African American to graduate from Clemson, the building’s unique architecture is reflective of the Longshoremen’s work in the maritime industry, including the prominent tapered tower and small windows meant to resemble a ship’s smokestack and portholes. Plans filed with the City in late 2021 show the construction of a 440-unit apartment complex that would result in the demolition of the existing building. 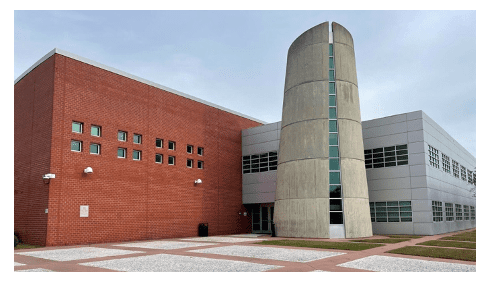 At press time, the future of the building is still uncertain, but the Preservation Society remains steadfast in advocating for the preservation of ILA Hall. Incorporating the building into the site’s redevelopment would honor the cultural significance of ILA Hall and embrace the evolution of this rapidly transforming district. We will continue to closely monitor and speak to proposals on the upper peninsula, which is sure to become an important hub for Charleston in the near future. Given all projects touched on in this piece have been approved and initiated construction in the past 3-4 years, keep your eye on the skyline – it is changing quickly.

**UPDATE: On March 23, 2022, a proposal to construct a 424-unit apartment complex by multifamily homebuilder, LMC, on the site of ILA Hall was unanimously denied by the Board of Architectural Review-Large (BAR-L). The PSC cited issues with the design’s incompatibility with Charleston’s urban character, and the Board agreed with our comments, noting the monotony of the building’s height, scale, and mass were unsuccessful.