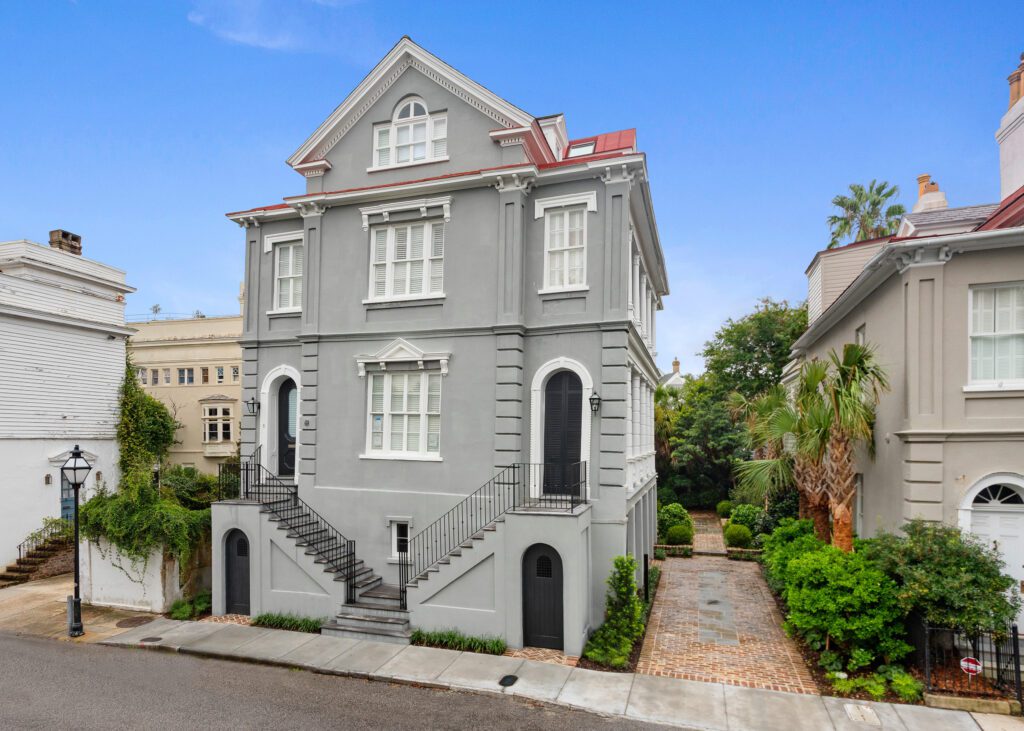 Since our inception in 1920, the PSC has relied upon public engagement on issues that matter most for Charleston. The organization’s grassroots principles and community-driven activism still from the foundation of our mission today. The Voices of Charleston series gives us the opportunity to share the stories of local residents and PSC supporters, without whom our work would not be possible.

No other project on the peninsula has drawn more interest in the past three years than the transformational house elevation project at 1 Water Street. A stone’s throw from the High Battery, the James Chapman House was built in the Italianate style in c.1857 by local architecture firm Jones & Lee. As one of two originally identical “sister houses,” at 1 Water Street and 3 Water Street, the house was initially built as an investment property that operated as a tenement until c.1866. In typical Charleston fashion, the house was constructed of brick overlaid with stucco, which was then scored to resemble the heavy stone masonry villas of Europe – and heavy it is, weighing upwards of 450 tons. The house is considered an excellent example of the style and craftsmanship of the mid-19th century, with its notable symmetrical façade, tripartite windows with ornate bracketed hoods, and unique banded piazza columns.

Resting on infilled land that was historically Vanderhorst Creek, the original brick foundation is situated atop a bed of cypress logs that allowed for a 2 1/2-foot crawlspace. As is all too common on the peninsula, the soil conditions, low-lying land, inadequate drainage, and rising surrounding waters contributed to persistent and worsening water infiltration in the crawlspace on a regular basis.

The real breaking point for the homeowners, Denise and Bernie Mansheim, came after a series of storms, including the Thousand Year Flood in 2015, Hurricane Matthew in 2016, and Hurricane Irma in 2017. These events repeatedly damaged the mechanical and electrical systems of the house, as well as inundated the first floor with water. In what became an unfortunate and costly routine, the Mansheims would elevate their furniture and belongings, then retreat to the second floor of the house during the floods. Ultimately, they made the choice to raise their historic masonry home eight feet to ensure its preservation. In reflecting on the decision, the Mansheims remarked, “We had three options: sell the house at a loss and walk away, live with worsening floods every year, or raise the house.”  With the help of a team of contractors, engineers, and architects, the elevation project began in earnest in the Fall of 2018.

In what would be the first raised masonry structure in Charleston, the team prepared extensive plans for six months before construction began, which included seeking approvals through the city’s Board of Zoning Appeals and Board of Architectural Review, as well as acquiring a FEMA Variance. Among the considerations included the design of a new double staircase to access the newly-elevated front door and massed piazza, as well as a lot occupancy variance for the rear patio and stairs. About the process, Dr. Mansheim emphasized, “I can’t overstate how impressed I am with the support of the city, the review boards, and organizations like the Preservation Society. Concepts like raising an old house have changed, and it’s so critically important that if we want to save Charleston we need to talk about these options. People have been nothing but supportive.”

The homeowners moved out of the house in May 2019, and three structural engineering teams were brought in: one to oversee the initial excavation and temporary supports, one to handle the physical elevation process, and one to design the new elevated foundation. In order to ensure stability for a lift of this weight in Charleston’s soil conditions, the team had to pour fifteen concrete pads supported by helical piers seventy feet deep to form a solid base. A network of support beams braced the house, and a strikeline between the foundation and the wall was established to naturally break during the elevation process. A series of thirty jacks with individually calibrated pressures were deployed to lift the house eight inches a day over a series of six days. Once the house was raised, it rested on a temporary foundation while the new reinforced concrete foundation, supported by ninety-one helical piers, was constructed up to the historic walls. Contractor Robert “Buz” Morris underscored that, “From the house down, it’s all modern, by today’s codes and standards, and will ultimately be extremely solid and built to last. Meanwhile, inside the house will be exactly as it was, there will be very little that’s changed.”

While the majority of the new construction takes place below grade or under the house’s prominent façade, the new double staircase, designed by architect Julia Martin, seamlessly blends the old with the new. While similar in scale and overall design to several existing historic examples in the city, there are architectural elements that clearly differentiate the structure as modern. The design provides small-scale interest at the pedestrian level such as the arched doors and landing window. On the whole, the project exemplifies the many recommendations found in the city’s Design Guidelines for Elevating Historic Buildings, which the PSC helped to develop several years ago. The document focuses on four key areas to guide elevation projects: streetscape and context, site design, foundation design, and architectural considerations.

The newly designed landscape of the site was also skillfully planned to withstand increasing weather events. The modern space under the house now includes porous concrete flooring, and a series of cisterns that collect water from the rooftop gutters and efficiently distribute it for irrigation. Landscape architect Glen Gardner also thoughtfully incorporated water tolerant plantings and improved permeability and drainage in his garden plan. Iron gates, salvaged prior to the elevation, were repurposed and incorporated into a new landscape design that complements the historic architecture.

The Mansheims were able to move back into 1 Water Street in the Fall of 2021, three years after embarking on this journey to raise their house. The Preservation Society was eager to celebrate their success, hosting our Susan Pringle Frost Circle reception this past November to showcase the finished product. The project was also awarded a Pro Merito Carolopolis Award, which acknowledges properties that have maintained a high standard of preservation or have undergone a second, significant exterior rehabilitation, restoration, or preservation effort. Without a doubt, the 1 Water Street project meets the standard of a significant preservation effort, as the Mansheims will attest, “We love it here, we love the house, and it’s worth the investment to us. People told us we couldn’t raise a masonry house, but as it turns out, we can.”

The PSC is grateful for the incredible stewardship of Denise and Bernie Mansheim, as well for the talents and dedication of the team of design and engineering professionals that set the standard for house elevations of this scale and architectural merit in the city. The challenges of flooding in Charleston continue to negatively impact historic resources on and off the peninsula, and the PSC is committed to developing sensitive and innovated solutions that safeguard both individual homes such as 1 Water, as well as the city at large.