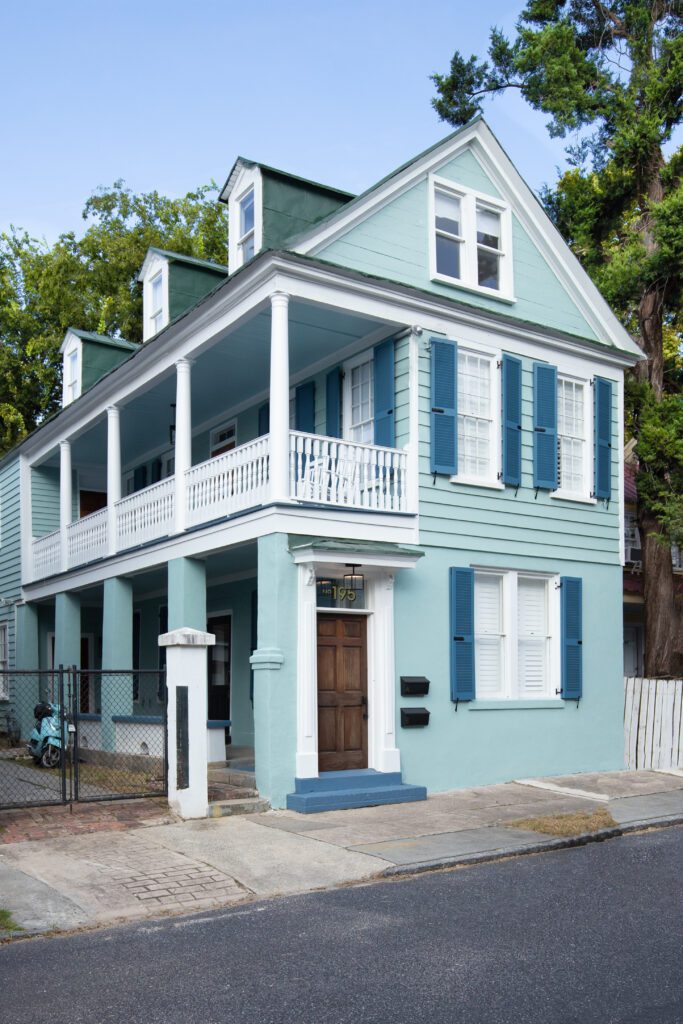 Since our inception in 1920, the PSC has relied upon public engagement on issues that matter most for Charleston. The organization’s grassroots principles and community-driven activism still from the foundation of our mission today. The Voices of Charleston series gives us the opportunity to share the stories of local residents and PSC supporters, without whom our work would not be possible.

It was a privilege to learn more about the rehabilitation project at 195 Smith Street from long-time Charleston resident, Eleanor C. Nelson, and current owner, Vicki Richardson following their acceptance of a Carolopolis award at this year’s ceremony. The Carolopolis Awards program is intended to honor excellence in historic preservation and its impact on the built environment, which is exemplified to the highest degree at 195 Smith Street. Beyond the bricks and mortar, the history of this house and this family lie at the heart of why historic preservation matters here – that places like 195 Smith Street represent powerful personal and collective memories that let us understand our city in different and meaningful ways.

Constructed in c.1835, the 2-1/2 story house is an excellent example of the vernacular style found throughout Cannonborough-Elliottborough. This is is evidenced by the surviving materials and detailed craftsmanship uncovered during the rehabilitation. While the house has certainly weathered many important historic events throughout its 180-year history, it was notably the first meeting place of the Owl’s Whist Club in 1914 under the ownership of Frank W. Dawson. What began as an informal group of African American men who played cards and discussed social issues of the day in a safe space, is now one of the nation’s oldest African-American membership clubs and continues to meet regularly in the Maryville neighborhood located west of the Ashley.

Remarkably, the house has also been continually owned and occupied by the Clark-Richardson family for the past four generations. Eleanor C. Nelson’s grandparents initially purchased the property, which was later inherited by Mrs. Nelson’s mother, Henrietta Clark, and aunt, Frances Richardson. Mrs. Nelson recalled what a full house it was growing up in the 1950s-60s with her extended family living under one roof. Mrs. Richardson echoed this comment, “I am not from Charleston, I married into the family, but every time I visited the house, it was always full of people. It was a warm and accepting atmosphere. All the kids in this family were college-educated and went off to all parts of the country, but they always had 195 Smith as a base, and they always came home.”

Mrs. Nelson and her cousins attended Immaculate Conception School, a private high school built for African Americans and run by the Roman Catholic Diocese of Charleston. She recollected her experience there: “Growing up on Smith Street was special, the neighborhood had a wide variety of people from all different backgrounds and it was very close-knit.” She described a vibrant, urban community where kids roller-skated in the street, enjoyed cookies from the corner store, and had all the amenities they needed nearby: butcher shops, doctors’ offices, laundromats, pharmacists, churches, and much more lined Cannon Street to the north and Morris Street to the south.

Both Mrs. Richardson and Mrs. Nelson have experienced the dramatic changes in Cannonborough-Elliottborough in recent years, and solemnly listed the many closed businesses, demolished buildings, and displaced long-time residents they’d known. Mrs. Richardson underlined, “Every time I came to Charleston, another house was gone.” She added that the families that lived in this part of town all originally owned their homes, which was very important to them. This meant they they were self-sufficient, contributing members of the community, and had property to leave to their children. Mrs. Nelson agreed that it was very important to her that the property stay in the Clark – Richardson family and they continue that legacy for future generations.

It was the family’s long history at the property and the notion that it was their duty to keep a part of the quickly disappearing neighborhood intact that ultimately led to its rehabilitation. Vicki Richardson and her husband Louis Richardson (Mrs. Nelson’s cousin), a trained contractor and engineer, completed at least two renovation projects at 195 Smith, but the building was still in need of significant repairs when they embarked on the project in 2018. Vicki Richardson remarked that it was fate that connected her with Rick Rockwell of Rockwell Construction after her husband’s passing, and she spoke highly of the care the team took in preserving as much historic material as possible.

The team at Rockwell Construction worked for nearly two years to complete this rehabilitation project, and there wasn’t much in the house that did not require some level of intervention, both on the exterior and the interior. The house had to be raised due to extreme settling over time, a measure that now provides long-term flood protection for the property. The first-floor masonry had to be fully re-pointed, including the walls, fireplaces, chimneys and columns. All the failing exterior stucco had to be removed, the cracks repaired, and a new skim coat applied. The clapboard siding was restored, repaired, and repainted, and the historic 9/9 windows were restored with their operability returned. Later modern additions like a metal spiral stair on the exterior were removed and the piazzas were restored. The house was outfitted with modern electrical and mechanical systems, and the historic tern metal roof was washed, scraped and re-painted. The PSC applauds the standard by which historic materials were retained and repurposed throughout the project, and the house now stands an example of modern-day preservation on Smith Street.

Mrs. Richardson emphasized that the process was long, but rewarding when Rockwell Construction made some surprising discoveries as they worked through the house. She said they removed eight layers of linoleum covering historic hardwood floors, and the team found artifacts such as historic bottles, an old easel, and other items hidden beneath the drywall. For her, she said that they just wanted the house to live again, and chose to expose some of the beams and masonry that tell the story of how this house was constructed. Rockwell Construction indicated that the bricks were laid in a pattern typical of African American builders at that time, which added another layer of meaning for the family.

When asked about the experience of the Carolopolis awards ceremony, Mrs. Nelson and Mrs. Richardson eagerly replied, “It was an honor.” For them the plaque represents the culmination of a lot of hard work and a substantial investment, which was a real cause for celebration. Many extended family members with personal connections to the house traveled from all over the country to receive the award and honor the project. Mrs. Richardson said, “It meant the world to me, and I did not know how prestigious this was before learning more about the Preservation Society. It was just amazing.” For Mrs. Nelson, it was a triumph to see her grandmother’s image on the screen while accepting the award. She stated proudly, “They were the ones who purchased the house and set it aside for their family and that’s special for us.”

The property at 195 Smith Street is a true preservation success story as it weaves together so many elements significant to the history of this community. The multi-generational legacy of the Clark-Richardson family, their resiliency, their achievements, and their connection to the neighborhood that was at the center of the African American experience in Charleston during the 20th century is one that the PSC is eager to share and honored to celebrate.