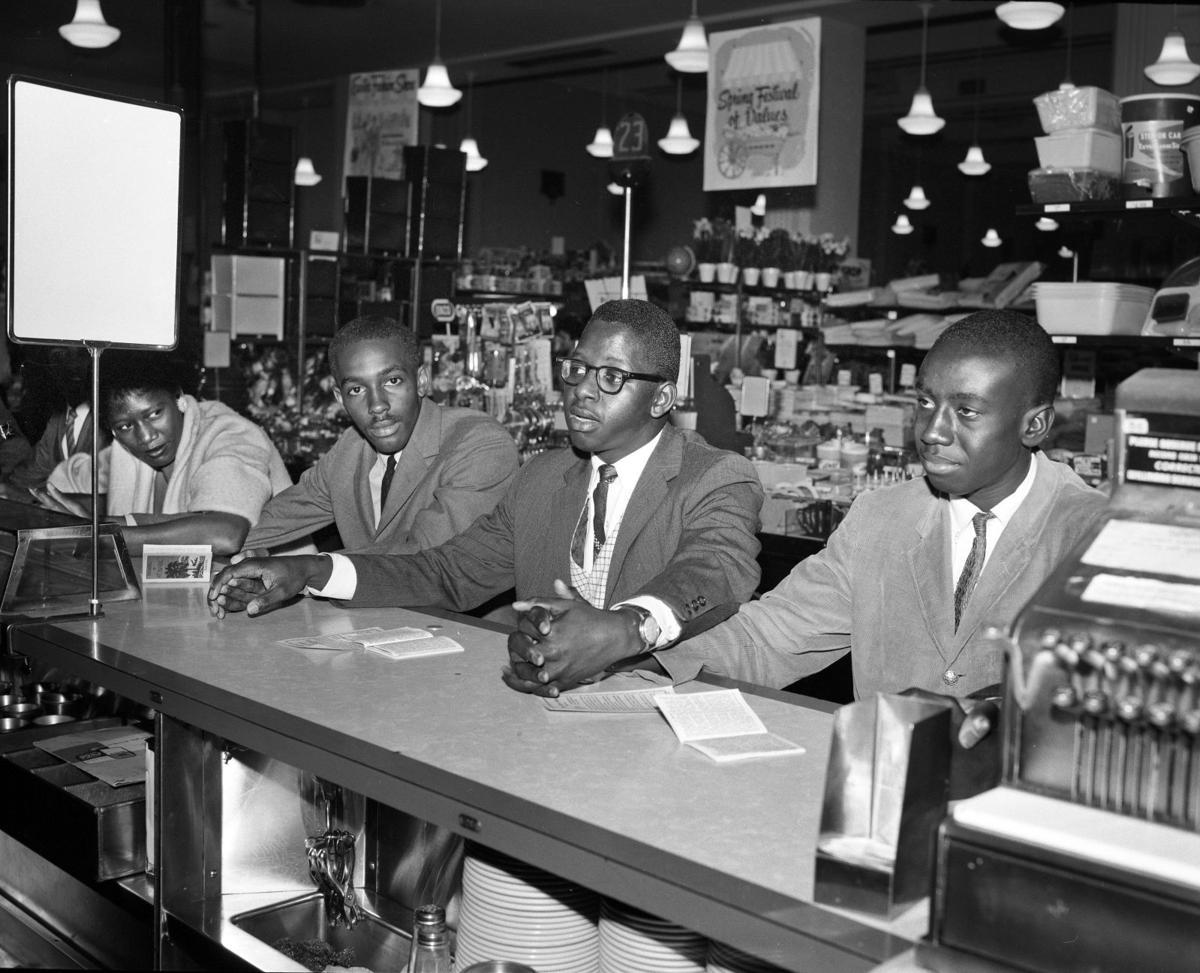 Constructed in 1931 to house national “five and dime” retailer, S.H. Kress & Co., the Kress Building at 281-283 King Street is known today as the site of one of the most impactful civil rights protests in the southeast. The three-story, yellow brick department store is one of Charleston’s most notable Art Deco style buildings, designed by the Kress company’s preeminent in-house architect, Edward Sibbert. Founded in 1896, S.H. Kress & Co. operated a chain of “five and dime” stores across the country, notorious for excluding African American patrons from its lunch counters. Throughout the South, segregated lunch counters in department stores like S.H Kress & Co. became principal platforms for peaceful protest against segregation during the 1950s and 1960s.[1]

On April 1, 1960, 24 students from the all-African American Burke High School quietly marched into the Kress Building on King Street and sat down at the lunch counter. Inspired by the student-led Greensboro, N.C. sit-in that took place on February 1 of that year, the Burke High School students met regularly at Emanuel A.M.E Church for months in advance of the Kress sit-in to plan and train for the non-violent demonstration.[2] Upon seating themselves at the lunch counter, the students were immediately refused service and asked to leave, but they peacefully resisted. In response, the manager removed the seats from any empty stools, and a waitress poured ammonia on the lunch counter.[3] When these efforts failed to deter the students, management falsely claimed that there was a bomb in the building, yet the students still refused to leave. After five hours of peaceful protest, the 24 demonstrators were ultimately arrested on trespassing charges when they refused to heed Charleston Police Chief William F. Kelly’s order to vacate the building.[4] Just hours later, local branch president of the NAACP, J. Arthur Brown, posted bail for the students, including his own daughter Minerva Brown. The student demonstrators were later represented in court by prominent Civil Rights attorney Matthew Perry. While the South Carolina Supreme Court ultimately decided that charges should not be pursued, the impact of the Kress Building sit-in had a major impact on the future of civil rights activism in Charleston.

This act of civil disobedience contributed significantly to the trajectory of organized, non-violent civil rights demonstrations in Charleston throughout the 1960s, known as the “Charleston Movement.”[5] During the Movement, there were several additional sit-ins at the Kress Building, including an attempted sit-in on July 25, 1960 that was prevented by Kress employees, and two successful demonstrations that took place on June 10 and June 11, 1963. Even after the passage of the national Civil Rights Act in 1964, which made segregation in public places illegal, the struggle against the firmly rooted system of racial oppression solidified under Jim Crow society continued for years to come.[6] The Kress sit-in of April 1, 1960, sparked lasting momentum in local civil rights activism and is recognized today as a significant moment of the American Civil Rights Movement.[7]

Many went on to make further impact in the Civil Rights Movement through continued activism. Notably, participant Harvey Gantt became the first African American student admitted to a public South Carolina university in 1963, and the first African American mayor of Charlotte, North Carolina in 1984.[9] Minerva Brown and her sister Millicent Brown were key plaintiffs in a high-profile lawsuit against Charleston County School District 20 challenging the District’s refusal to desegregate even after the U.S. Supreme Court ruled segregation in public schools unconstitutional in the landmark case Brown v. Board of Education in 1954. The case was filed under Minerva’s name in 1959, but the decision that Charleston County Schools must desegregate was not handed down until 1963, by which time Minerva had graduated high school and Millicent’s name replaced hers as the lead plaintiff in Millicent Brown et al v. Charleston County School Board, District 20.[10]

Click the images below to explore the Kress building sit-in gallery. 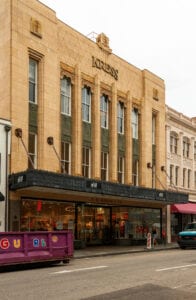 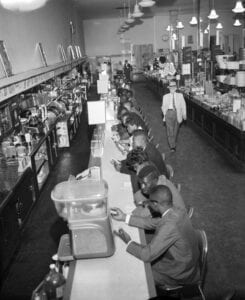 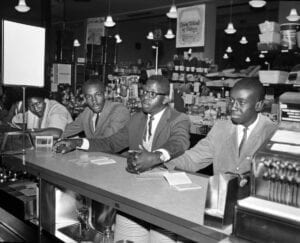 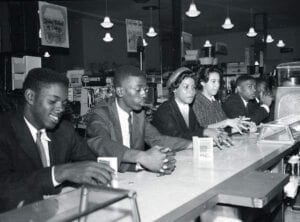 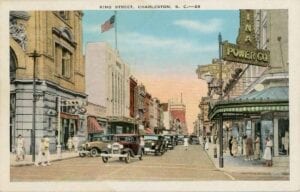 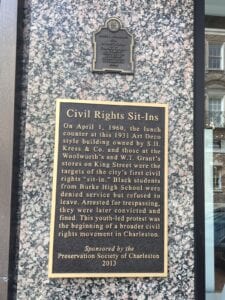 Image 2: Burke High School students seated at the Kress lunch counter on April 1, 1960. Courtesy of the Post and Courier.

Image 3: The Kress building located at 281-283 King Street in Charleston, South Carolina, 2019. Courtesy of the Preservation Society of Charleston.

Image 4: Burke High School students seated at the Kress lunch counter on April 1, 1960. Courtesy of the Post and Courier.

Image 6: Aerial Image of the 24 Burke High School students seated at the Kress lunch counter prior to their arrest. Courtesy of the Post and Courier.

[2]Adam Parker, “The Sit-in That Changed Charleston” Post and Courier, Online edition; Jon Hale, “‘The Fight Was Instilled In Us’: High School Activism And The Civil Rights Movement In Charleston,” The South Carolina Historical Magazine 114, no. 1 (2013): 4–28.

[10] Millicent Brown, Jon Hale, Somebody Had To Do It: First Children in School Desegregation, Desegregation in Charleston, Lowcountry Digital History Initiative, http://ldhi.library.cofc.edu/exhibits/show/somebody_had_to_do_it